RIP to one of the realest. 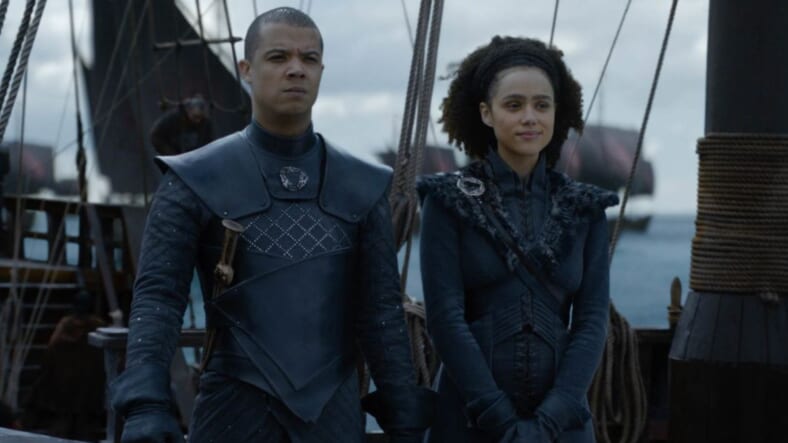 Game of Thrones has finally gone too far. Throw away the entire show now.

For the rest of the world, episode 4 of season 8 will go down in infamy as being the biggest, most expensive television show ever to allow a coffee cup to make it into a shot. But for Black fans, we had to endure one of our own getting the valar morghulis treatment. Missandei (Nathalie Emmanuel) was the first major character to get cut down in the “last war” between Daenerys Targaryen (Emilia Clarke) and her forces in the North, and Cersei Lannister (Lena Headey) and her armies in the south.

“The Last of the Starks” concluded with Tyrion Lannister (Peter Dinklage) attempting to make an appeal to Cersei’s humanity (because this apparently has worked before…never) as she held Missandei hostage. Dany’s trusted right-hand was kidnapped following the stupidest sneak attack ever by Euron Greyjoy (Pilou Asbæk), which decimated Daenerys’s ships and left her with yet another dead dragon. Appeals be damned, Cersei went Cersei and had her enforcer, Gregor “The Mountain” Clegane (Hafþór Júlíus Björnsson) take Missandei’s dome off in front of everyone.

Daenerys with a 3 dragon lead trying to close out the series like pic.twitter.com/PLhe7T4QOJ

I’m not sure what gave the show-runners the presence of mind to think they could off the only Black woman who has ever been a recurring character on the show and not hear it from us. Sure, it’s on-brand for the show to knock off Missandei since the truly good and noble are very often sacrificed as pawns in the game of the Iron Throne. But come on…on top of being the show’s single most attractive character, Missandei was nothing but love and light.

So… the one and only sister on the whole epic, years-long series? That’s what you wanna do? Okay. #GOT pic.twitter.com/O5G6YZMj0g

She was authentically loyal to Dany, not the way that most of us are forced to be pleasant to Kathy who only leaves her closed-door office to bark orders to those of us in the cubicles.

She was also loyal to her boo-thang, the Unsullied leader Grey Worm (Raleigh Ritchie), despite the fact that he had no worm at all to work with.

(There was one Black couple to love in the biggest television show on the planet, and now it is no more. I’m sure there will be some additional commentary from someone somewhere belaboring this point.)

My issue isn’t that Missandei’s death happened. I never expected her & Grey Worm to make it to that beach. My issue is that her death is the one way she said she didn’t want to die. She died in chains with no way to defend herself. Lyanna slays a giant. Missandei should have too.

I’m sad about Missandei’s death mainly because I really wanted to see her and GreyWorm make it. But this show never lets our faves get what they want ?

Also, through many different climates and environments, Missandei managed to keep an immaculate, wonderfully moisturized coif that even a man who knows very little about the intricacies of curl upkeep (like me) can appreciate. She had the baby hairs poppin’ on this episode, likely because she knew it would be her sendoff.

At least she went out like a G, saying “dracarys” (the dragons’ attack command) when Cersei asked her if she had any final words. Props to her for going out with her head up and not weeping like a baby at what she likely knew was her inevitable demise the moment she was captured. She knew her boss Kathy wouldn’t bend the knee to save her life – because what white woman boss do you know would ever step in some shit to save the job of their Black subordinate?

If you want to see more of Emmanuel, (and I would, on anything, because she’s insanely easy on the eyes) she can be found on the Four Weddings and a Funeral Hulu miniseries set to air this summer. And she’s still kicking in the never-say-die The Fast and the Furious movie series, so we haven’t seen the last of the British actress by any means.

But for Missandei, let’s pour some sour goat’s milk. Pour a little more for her curl pattern.