‘Keep up’: Al Roker claps back at viewers concerned he is too old to report live from Hurricane Ida

What does legendary meteorologist Al Roker have in common with six-time NBA champion Michael Jordan, other than their shared birthplace of New York City and their widely-regarded status as all-time greats of their respective professions?

Having spent over 40 years in the weather reporting business, Roker had plenty of experience to draw upon during his live report on the scene of Hurricane Ida on Sunday — so he didn’t take too kindly to that comments that began circulating social media suggesting the 67-year-old was too washed up to be in harm’s way and could get washed away by the devastating conditions.

During the broadcast on NBC’s “Meet the Press,” Roker delivered his report standing a few yards away from Lake Pontchartrain in New Orleans, Louisiana, keeping his balance despite being visibly hit multiple times by waves blown by the hurricane’s 150 mile-per-hour winds.

Immediately after the Sunday morning broadcast, social media lit up with comments from viewers concerned about the network’s decision to deploy Roker so close to the Category 4 storm. 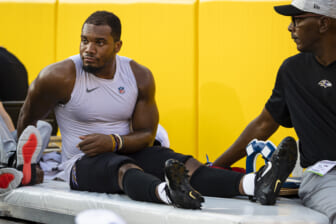 Roker addressed the comments later on Sunday during an appearance on MSNBC’s “The Sunday Show with Jonathan Capehart,” telling any “young punks” who doubt the veteran meteorologist’s capabilities to “keep up.”

“I volunteered to come out here, this is what I do. I’ve done this for 40 years,” Roker said. “Our crews, we all make sure we are safe, and we’re not going to do something to put ourselves in harm’s way. As much as I love the weather and I love NBC, I’m not going to risk my life for it.” 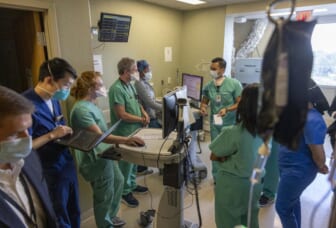 “Secondly, ‘well, he’s too old to be doing this,’ well, hey, guess what? Screw you, okay?” Roker joked, eliciting a big laugh from Capehart.

“Try to keep up. Keep up, OK?” he continued. “These young punks. I’ll come after them. I will drop them like a bag of dirt.”

Roker also posted a video to his Instagram account documenting him emptying the water from his boots after returning safely from the broadcast.

“For all those who were worried about me out on #lakepontchartrain a) I volunteered to do this. Part of the job. b) My crew and I were safe and we are back at our hotel and c) for those who think I’m too old to to be doing this, try and keep up,” he wrote.

Already one of the most powerful storms in U.S. history, Hurricane Ida touched down Sunday along the Gulf Coast near Louisiana’s Port Fourchon. Coincidentally, 16 years earlier to the day, Hurricane Katrina touched down in New Orleans.