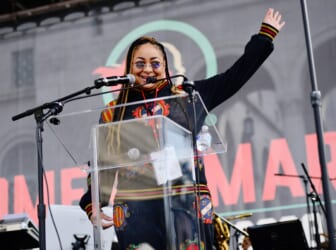 Hamilton charmed audiences across the country when she won HGTV’s Design Star: Next Gen. An interior designer from Memphis, Tennessee, Hamilton won the reality series earlier this year, earning $50K and her own HGTV show.

With over 130K followers on Instagram, the designer has a substantial following on the social media app. And it was with that following that she shared some tragic news with on Saturday.

In her heartbreaking post, Hamilton shared a black and white photo of her late husband, Marcus Hamilton. Calling him “the love of her life,” she shared the news that he died in a motorcycle accident.

She wrote in her post, “To my extended Internet family, it is with deep sorrow and an eternally broken heart that I tell you that the love of my life, Marcus Hamilton, has passed away. I was alerted by MPD late last night that Marcus succumbed to his injuries from a motorcycle accident yesterday afternoon.”

She continued to write about her grief amid this massive loss, posting, “I’m no stranger to loss, but this loss brings something beyond pain. Something I can’t describe. I’m now missing a major part of myself and that void seems to grow more and more every second.”

She continued to write about how she does not know what will come next for her and their son, Davin, who is in the seventh grade.

She wrote, “I can’t bring myself to figure out Davin’s and my next step, because there shouldn’t be a need for one. But in the midst of this immense pain came a wave of support from the community of people that we’ve worked so hard to build. They are the only reason I have the strength and ability to put these words in writing.”

She concluded her post by thanking her supporters who she says were “the best parts” of her love story.

She wrote, “Thank you all for being one of the best parts of our love story and loudly encouraging us to be the passionately flawed humans we were, living a life well lived. I only ask for grace and privacy as my family and I navigate this extraordinary loss. I love you peeps.”

Hamilton recently took to Instagram to celebrate her 10th wedding anniversary with Marcus. The couple had been together for a total of 15 years and were planning a vow renewal ceremony later this year.

She wrote in May, “Meeting this man is the absolute best thing that’s ever happened to me!”

As previously mentioned, when winning Design Star: Next Gen, Hamilton won her own series on HGTV and Discovery +. The show, Reno My Rental, is set to debut on Sept. 18 with what will surely be a tribute to her late husband included as well.