McKennie, who plays for Juventus, had started Thursday night’s opening 0-0 draw at El Salvador and is among the top American players.

“Unfortunately, I am suspended for tonight’s match due to a violation of team COVID-19 protocols,” McKennie said in a statement he posted on Instagram. “I am sorry for my actions. I will be cheering hard for the boys tonight and hope to be back with the team soon.”

McKennie was dropped for Juventus’ derby at Torino on April 3 by coach Andrea Pirlo. McKennie and teammates Paolo Dybala did not dress, and Italian media reported the reason was a party at McKennie’s residence in Turin that violated Italian COVID-19 restrictions. 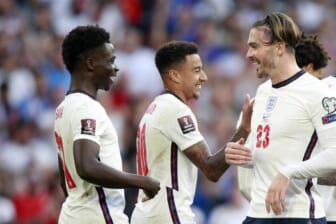 Winning home games is the key to World Cup qualifying, and the Americans went into Sunday night’s match against visiting Canada uncertain whether star attacker Christian Pulisic would be available and knowing No. 1 goalkeeper Zack Steffen remains out.

“We’ve been getting him up to speed with training. We’re trying to see what he can tolerate, see what type of workloads he can do, and I think that’s the first step,” U.S. coach Gregg Berhalter said Saturday.

A 22-year-old attacker who last season became the first American to play and win a Champions League final, Pulisic missed Chelsea’s 2-0 win at Arsenal on Aug. 22 and a 1-1 draw at Liverpool on Aug. 28. He resumed training with the U.S. on Monday and remained in Tennessee when the team traveled to Central America.