Tiffany & Co. along with Beyoncé and Jay-Z were under some hot water last week after their latest collaboration was critiqued for using the Tiffany diamond. Now, it seems Basquiat’s collaborators are also vocally critiquing the campaign, speaking out about the painting used in the photos.

Beyoncé and Jay-Z broke the internet when they launched their “ABOUT LOVE” campaign with Tiffany & Co. The glamorous photos featured the power couple posing together in front of a never-before-seen Jean-Michel Basquiat painting entitled Equals Pi, and with Queen Bey rocking the iconic yellow Tiffany Diamond. “As a brand that has always stood for love, strength and self-expression, we could not think of a more iconic couple that better represents Tiffany’s values,” Alexandre Arnault, Tiffany & Co. EVP of product and communications, shared at the time.

Now, it seems their use of the Basquiat photo is getting some side-eye. 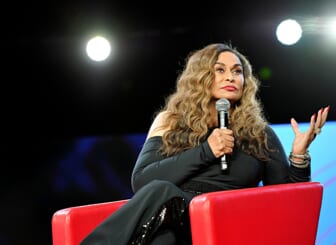 The Daily Beast exclusively sat down with some “close friends of Basquiat’s who lived and worked with the late, trailblazing artist in the late ’70s and early ’80s,” to get their feelings on the new campaign. Alexis Adler, who lived with Basquait from 1979 – 1980, shared with the outlet, “I’d seen the ad a couple days ago and I was horrified…the commercialization and commodification of Jean and his art at this point—it’s really not what Jean was about.”

Adler also shared that where Basquiat’s art was displayed mattered far more to the artist than the money it made. Adler continued, “Unfortunately, the museums came to Jean’s art late, so most of his art is in private hands and people don’t get to see that art except for the shows. Why show it as a prop to an ad? Loan it out to a museum. In a time where there were very few Black artists represented in Western museums, that was his goal: to get to a museum.”

Stephen Torton, who worked alongside the artist as his assistant for years, took to Instagram to express frustration surrounding the use of the painting.

Torton shared in the post, “I was Jean Michel Basquiat’s assistant . I designed and built stretchers, painted backgrounds, glued drawings down on canvas, chauffeured, travelled extensively, spoke freely about many topics and worked endless hours side by side in silence . The idea that this blue background , which I mixed and applied was in any way related to Tiffany Blue is so absurd that at first I chose not to comment . But this very perverse appropriation of the artist’s inspiration is too much.”

Torton shared official statements to The Daily Beast as well, saying, “They wouldn’t have let Jean-Michel into a Tiffany’s if he wanted to use the bathroom, or, if he went to buy an engagement ring and pulled a wad of cash out of his pocket. We couldn’t even get a cab.”

Beyoncé’s use of the yellow Tiffany Diamond also was under fire when the campaign dropped, with many users criticizing the use of a blood diamond, theGrio previously reported. One viral tweet read, “Tiffany’s put Beyoncé in a diamond —“discovered” in a colonial mine in Kimberly in 1877—that no black woman has ever worn before in an ad with a never-ever-before-seen Basquiat and then pledged $2 million in scholarships & internships to HBCUs.”