Rapper A Boogie Wit Da Hoodie was arrested in London prior to his performance at the Wireless Festival on Saturday afternoon.

Festival organizers announced that the rapper, whose real name is Julius Dubose, would not be appearing during his scheduled set, and that they were hoping to reschedule him for Sunday.

The full details of the arrest have yet to be released, but according to the Bronx rapper’s post on social media, he was detained “for something [he] was accused of 2 years ago.”

In the same post, the 25-year-old rapper apologized to fans who wanted to see him, writing “smh sorry to everyone who came out to see me at Wireless.” 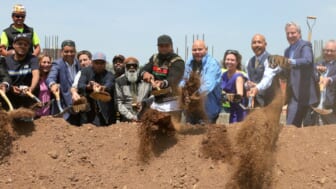 The arrest of the “Look Back at It” rapper came as a surprise to many of the attendees of the two-day festival in South London.

The Wireless Festival, which took place from September 10 to 12 at the Crystal Palace Park, was jam-packed with musical artists like Future, the Migos, Young Thug, Megan thee Stallion and London drill rapper Skepta.

Canadian rapper Drake made headlines after a surprise performance with Future of their viral song “Way 2 Sexy.”

Many fans voiced their disappointment about his absence on social media. One fan posted on Twitter, saying, “I cannot believe I bought weekend wireless tickets mainly to see A Boogie and he got f*ucking arrested before his performance.”

Another fan directed her anger to the festival organizers and requested a refund.

A statement from a Metropolitan police spokesperson said: “The arrest was made by Met Police officers at the request of the Greater Manchester Police.”

A video capturing the arrest, which shows the rapper being taken away in handcuffs, was posted by a Twitter user.

Dubose has been released on bond and will have “to attend a Greater Manchester police station at a later date,” the spokesperson added.