Black doctor breaks down the science behind ‘Milk Crate Challenge’

A professional engineer and educator took to the worldwide web to explain why the Milk Crate Challenge fails.

In a three-minute explanation for Wired, Dr. Nehemiah Mabry informs the curious how the Milk Crate Challenge consists of stacking crates in columns that are unsupported. Columns are designed against buckling, he says, unless they face a critical load.

The critical load is the maximum weight a column can take before it becomes unstable. The skinnier and taller a column is, the less critical load is required for it to become unstable and fall over — which is what usually happens in the popular social media challenge.

Dr. Mabry explains that challengers typically fall descending down the crates because they have to control the placement of their weight more than they did ascending. He says that, ideally, one would put their weight in the center of the crate, but that requires extensive muscle control; otherwise, it’s a usually painful tumble alongside the temporary steps.

The challenge with the plastic milk crates became popular in August of this year, and it involves stacking them into a structure that resembles an awards podium, and the participant uses both sides as stairs. The challenge is to make it to the top of the podium and back down.

Doctors have called the challenge extremely dangerous because participants are putting themselves at high risk for injury, and orthopedic surgery, which could be necessary due to an injury or emergency, would be considered elective and costly. 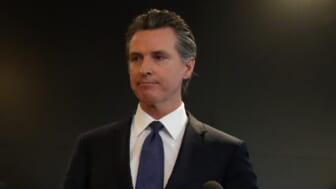 Also Read:
California voters: Less Republican and white than in 2003

According to The Washington Post, injuries from the challenge have resulted in shoulder dislocations and rotator cuff tears, ACL and meniscus tears, broken wrists — even spinal cord injuries.

It became popular on TikTok, and the social media platform issued a statement late last month, saying: “TikTok prohibits content that promotes or glorifies dangerous acts, and we remove videos and redirect searches to our community guidelines to discourage such content. We encourage everyone to exercise caution in their behavior whether online or offline.”

The challenge was posted to Facebook on Aug. 1 and went viral within weeks, with one video being viewed more than 5 million times in a single day.