Netflix has dropped the trailer for Colin in Black & White, starring Jaden Michael as a young Colin Kaepernick before he became a controversial figure in the NFL.

The streamer announced that the six-episode scripted drama will premiere on Oct. 29, and previously released some first look photos from the project. Colin in Black & White is co-created by Kaepernick and Ava DuVernay, who will direct along with Robert Townsend, Sheldon Candis, Angel Kristi Williams, and Kenny Leon, theGRIO previously reported.

Watch the teaser in full below. 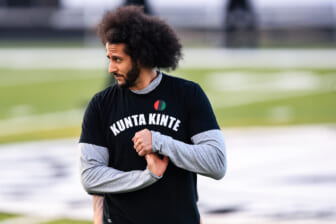 From co-creators Ava DuVernay and Colin Kaepernick comes Colin in Black & White, a bold new limited series that chronicles Kaepernick’s coming of age story, tackling the obstacles of race, class and culture as the Black adopted child of a white family. Colin in Black & White stars Jaden Michael as Young Colin before reaching the highest levels of American football as an NFL quarterback and becoming a cultural icon and activist; Nick Offerman and Mary-Louise Parker as his well-meaning parents Rick and Teresa; and Colin Kaepernick himself, who appears as the present-day narrator of his own story, guiding viewers through a robust and colorfully presented array of historical and contemporary contextual moments. You don’t know Kaepernick until you know Colin.

“I’m excited to share this first peek into a project I co-created with the incomparable Ava DuVernay over the past couple of years,” Kaepernick said in a statement. “I look forward to the world meeting the incredible Jaden Michael, a young actor who plays me during my high school years, just a kid growing up in Turlock, California who wanted to play ball.”

As previously reported by theGRIO, the former San Francisco 49er may not ever play in the NFL again, but he’s continuing his activism around social justice. Kaepernick previously announced plans to release a book of essays advocating the abolition of police and prisons,  per TMZ.

The book, entitled Abolition for the People: The Movement for a Future Without Policing & Prisons, is set for release on Oct. 12 with 30 essays. Kaepernick is credited as the book’s editor but will author one of the essays himself.

Kaepernick formed his publishing company in 2019 as part of an outgrowth of his social justice work that started when his peaceful anthem protests became controversial.

The former quarterback hasn’t played in the NFL since the 2016 season, but that didn’t stop teams from inquiring about his availability as recently as last year. 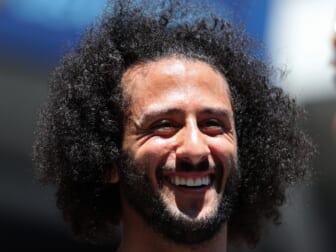 He was pursued by at least one NFL team last season, even in the midst of a pandemic, theGrio previously reported. There still seems to be interest in his services as a quarterback.

ESPN’s Josina Anderson reported in May that she’d spoken with a head coach who said Kaepernick was garnering interest from the NFL in 2020.

“But wait, there’s more: I actually pointed out many times already that Kaepernick had interest last season -after direct convos w/t HC myself-but did not end up there. This fact actually illuminates some opportunity, as opposed to bemoaning the lack of it,” Anderson tweeted.