Former President Barack Obama is responsible for the death of rock’n’roll — so says Jeremy Boreing, conservative host of the Daily Wire Backstage.

Michael Knowles chimed in agreement before Boreing continued, “There was rock ‘n’ roll, then there was Barack Obama, now there is no rock ‘n’ roll,” he claimed, as reported by the New York Daily News.

“Rock ‘n’ roll was about white male angst, white male teenage angst,” he continued. “Barack Obama came along and said ‘young white men aren’t allowed to have angst. They’re not allowed to basically express their dissatisfaction because they’re so toxic.’”

Ben Shapiro noted the history of the genre, “And stealing a lot of its tropes from better Black music,” before Boreing said Obama came along and “rock ‘n roll just stopped.”

One person tweeted in response to the conversation, “In 50 years we will be arguing with these white men’s grandchildren that Eminem did not invent rap and Justin Timberlake did not invent R&B.”

Author Tomi T Ahonen added, “EVERYTHING about this short statement is wrong EVERYTHING. President Obama did not destroy Rock n Roll in any conceivable way Rock n Roll was NEVER about WHITE MALE ANGST. You can find white male angst in COUNTRY MUSIC, plenty of it Rock n Roll was INVENTED BY BLACK MUSICIANS.”

A third Twitter user wrote, “Country is just a southern offshoot of blues and southern gospel tradition. I don’t think there’s any 20th century musical movement in North America that wasn’t created by someone of African descent.”

Obama teamed with Rock ‘n’ Roll icon Bruce Springsteen in February on a nine-part podcast that saw the pair unpacking everything from fame to fatherhood and their favorite music. A book edition of their conversations drops in October, theGRIO reported.

Renegades: Born in the USA is a bound edition of the popular “Renegades” podcast from Penguin Random House and Obama’s Higher Ground. Renegades will come out on October 26. The $50 book will include rare photographs, handwritten Springsteen lyrics, and annotated Obama speeches.

“Over the years, what we’ve found is that we’ve got a shared sensibility,” Obama said in a statement. “About work, about family, and about America. In our own ways, Bruce and I have been on parallel journeys trying to understand this country that’s given us both so much. Trying to chronicle the stories of its people. Looking for a way to connect our own individual searches for meaning and truth and community with the larger story of America.” 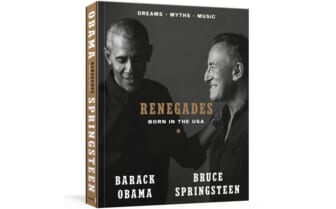 In an introduction for the book, Springsteen wrote that he and Obama had raised serious issues about the “fate of the country, the fortune of its citizens, and the destructive, ugly, corrupt forces at play that would like to take it all down.”

“This is a time for serious consideration of who we want to be and what kind of country we will leave our children,” wrote Springsteen, who in 2016 received a Medal of Freedom from Obama. “Will we let slip through our hands the best of us or will we turn united to face the fire? Within this book you won’t find the answers to those questions, but you will find a couple of seekers doing their best to get us to ask better questions.”