The new studio venture will be led by Aisha Summers-Burke in partnership with Kenya Barris, Rashida Jones and Aaron Rashan Thomas

A star-studded lineup of Black creators is helping launch a new television and film studio to represent, uplift and nurture Black content creation perhaps for generations to come.

ViacomCBS on Wednesday announced the launch of BET Studios, offering Black creators equity ownership in their development of premium television series and films for both in-house and outside outlets.

Newly-appointed Executive VP and General Manager of BET Studios Aisha Summers-Burke will partner with the likes of Kenya Barris, Rashida Jones and Aaron Rashan Thomas to bring the vision to life.

“The demand for premium content from Black creators has accelerated dramatically as a result of both the rapidly changing media and social landscapes,” BET President Scott Mills said in a statement. “BET, with our 40-year legacy of celebrating Black culture, and the full power of the ViacomCBS ecosystem—is uniquely positioned to service this demand.”

“As a company with its origin in Black entrepreneurship, we are incredibly excited to create the first major studio to provide Black creators with ownership, creative freedom and the unparalleled partnership and support of BET,” Mills continued. “I am thrilled to have Aisha at the helm of this venture, and I look forward to our collaboration with our amazing creative partners in BET Studios.”

She added that through BET Studios, she and her team look forward to introducing a new studio model that “opens the aperture to a broad array of platforms and supports the full range of content from Black creators.”

“BET Studios is an exciting and novel extension of the storied BET brand, and we have a structure well-suited to our times to bring top talent into this production company with real ownership,” said David Nevins, chief content officer for scripted originals at Paramount+ and chairman and chief executive officer for Showtime Networks Inc.

“Scott Mills deserves tremendous credit for driving this innovative new business from idea to reality – and Kenya, Rashida and Aaron, could not be a more talented or in-demand group to lead this venture along with Aisha Summers.”

Barris, an Emmy-nominated writer, producer and director best known as the creator of the show Black-ish, turned down a nine-figure Netflix deal to move to BET Studios, telling The Hollywood Reporter in June that he made the switch to produce more “in-your-face s***.” 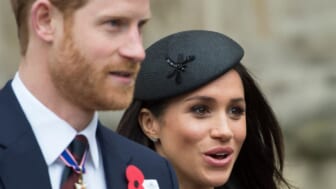 Also Read:
Meghan, Harry’s daughter Lilibet added to line of succession after being unlisted for weeks

“The investment being made by Scott, David Nevins, Bob Bakish and the ViacomCBS team into BET Studios is not only an investment in Black storytelling, it is also an investment in the culture,” Barris said. “And while individual success is great, being able to amplify and champion underrepresented storytellers has been equally exciting and this venture allows that to continue to be a key focus in this next chapter of my career.”

Joining Barris in the venture is Jones, the co-star of Barris’ recently-canceled Netflix series #BlackAF,” along with Thomas, co-creator of CBS’s “S.W.A.T.”

“There is such power in the creative talent that the principal partners bring to the table and BET Studios’ unique ability to tell Black stories at scale,” Jones said. “This joining of forces is super exciting for me in the multitude of ways that people of color see themselves represented on screen.”

“As a new venture, BET Studios offers an opportunity to expand the brand’s legacy of delivering Black stories,” Thomas added. “This is a chance to bring nuanced, layered narratives to life, partnering with a forward-thinking team, interested in surprising and engaging the audience.”