Meghan, Harry’s daughter Lilibet added to line of succession after being unlisted for weeks

The first daughter of the Duke and Duchess of Sussex has now been added, according to the official royal website

According to the Royal.UK website, Meghan and Harry’s daughter Lilibet Diana has officially been added to the line of succession after being unlisted since her birth in June.

As TheGrio previously reported, The Duke and Duchess of Sussex welcomed their second child, Lilibet Diana Mountbatten-Windsor in June. ‘Lili’ for short, the name is a tribute to Harry’s grandmother, Her Majesty The Queen, as well as his late mother Princess Diana.

At the time of her arrival, the official statement read, “Lili is named after her great-grandmother, Her Majesty The Queen, whose family nickname is Lilibet. Her middle name, Diana, was chosen to honor her beloved late grandmother, The Princess of Wales.”

Only now, however, has the royal baby been officially added to the line of succession.

The line of succession follows those who were ‘born royal,’ omitting family members like the Duchess of Sussex (Markle) and Kate Middleton, the Duchess of Cambridge.

Lilibet joins the line of succession in eighth place, right after her brother, Master Archie Mountbatten-Windsor. Preceding him are his father, Harry (The Duke of Sussex), his cousins, Prince Louis of Cambridge in fifth, Princess Charlotte of Cambridge and then Prince George of Cambridge in third, respectfully.

Their father, the Duke of Cambridge (Prince William) sits at number 2, with The Prince of Wales (Prince Charles) at the top.

Per theGrio, the Sussexes get to keep their place in the line of succession although they very publicly took “a step back” from royal life in early 2020.

Revealed in the bombshell interview with Oprah Winfrey that aired earlier this year, the couple suffered many challenges while living as royals, including major mistreatment of Markle and her mental health concerns, questioning of Archie’s skin tone from fellow royals, and more. 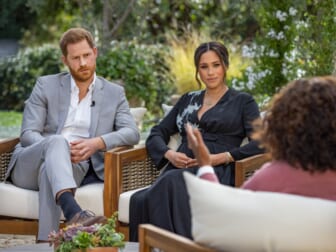 Markle gave her first interview after giving birth to her daughter (and since the Oprah interview) in June when she was promoting her new children’s book, The Bench.

She shared in the interview, “Growing up, I remember so much how it felt to not see yourself represented. Any child or any family hopefully can open this book and see themselves in it, whether that means glasses or freckled or a different body shape or a different ethnicity or religion.”

The line of succession can be read at the official royal website, here.