Trump says Stacey Abrams ‘might be better’ than Gov. Kemp at rally

As former President Donald Trump is slowly returning to the public eye, he maintains his assertion that he was cheated out of the 2020 presidency. He even went as far as to evoke the name of Stacey Abrams as an effort to insult Georgia Governor Brian Kemp at a rally this Saturday.

Trump held the rally in Perry, Georgia and continued to say that voter fraud led to his defeat in the race against current U.S. President Joe Biden, according to The Hill. During his speech, Trump brought up Abrams, implying that there was a double standard when it came to election succession, stating that she was given time and grace when she ran for governor of Georgia, while he was pushed to concede. 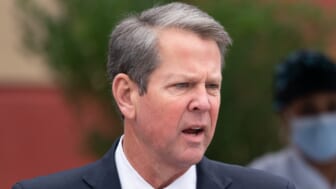 “When Stacey Abrams says I’m not going to concede, that’s okay,” Trump said. While Abrams did not initially concede the 2018 gubernatorial election against Kemp in order to investigate voter suppression, Abrams has clarified that her refusal to concede did not have the same implications as Trump’s.

“There is absolutely nothing commensurate between what I have done and what Donald Trump is trying to do,” Abrams told CNN in 2020. “My mission has been very clear since I was 17, and that is expanding access to the right to vote for those who are entitled to vote in our country and especially in the state of Georgia. What Donald Trump is arguing is that he only wants to count the votes that he likes.”

During the rally, Trump used Abrams’ name to directly insult Kemp. “Of course, having her I think might be better than having your existing governor, if you want to know the truth.”

It appears that Trump is still upset with Kemp after the Georgia lawmaker certified Biden’s win in the state following the election. Last December, Trump reportedly asked Kemp to approve an audit of absentee ballot signatures. He also asked Kemp to call a special session to convince legislatures to chose electors to assist him, as previously reported by theGrio.

Kemp denied Trump’s request and emphasized that he didn’t have the authority to authorize such an audit.

In February, the office of Georgia’s secretary of state initiated an inquiry into Trump’s attempt to pressure Brad Raffensperger to find 11,000 votes that would give him the victory in that state, as previously reported by theGrio.