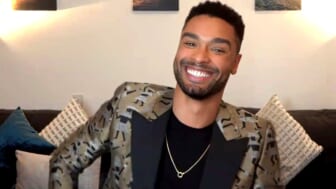 It hasn’t even been a year since Bridgerton premiered on Netflix and became the streamer’s biggest show ever. A period drama created by Chris Van Dusen and executive produced by TV titan Shonda Rhimes, the series was streamed by millions of households after its premiere on Christmas Day in 2020.

Deadline reported in January 2021. “Season 1 of Bridgerton was watched by a record 82M households around the world (partially or in its entirety.) That is a whopping 19M households higher than the four-week projection Netflix issued 10 days into the Shondaland series’ run (63 million), at the time the streamer’s fifth-biggest launch in history,” the report stated a few weeks after the series premiere.

Now, Netflix has dropped some first look photos of the second season of Bridgerton. As theGrio previously reported, the second season takes the spotlight off of season one leads Daphne Bridgerton (Phoebe Dynevor) and The Duke of Hastings (Regé-Jean Page), and shifts to Daphne’s troubled older brother, Lord Anthony Bridgerton.

Season 2 introduces viewers to the Sharmas, a new family entering the Bridgertons’ orbit. In the exclusive new photos above, Lady Danbury (Adjoa Andoh), seem to be showing the Sharmas the ropes at a society event, while in another photo Kate Sharma (Simone Ashley) and Lord Anthony Bridgerton (Jonathan Bailey) catch each other’s eyes.

As theGrio previously reported, fan-favorite breakout star Regé-Jean Page turned down a $200K offer to appear in the second season, despite earning an Emmy nomination for his portrayal in the first season.

Speaking to Variety about his decision earlier this year, he shared, “It’s a one-season arc. It’s going to have a beginning, middle, end – give us a year…[I thought] ‘That’s interesting,’ because then it felt like a limited series. I get to come in, I get to contribute my bit and then the Bridgerton family rolls on.”

He added, “I have nothing but excitement for Bridgerton continuing to steam train off and conquer the globe…but there is also value in completing these arcs and sticking the landing.”

In addition to the exclusive photos, Netflix also released an intense first look scene between Bridgerton and Sharma sure to get fans pumped to root for another couple. Check out the clip below: