EXCLUSIVE: “Justice continues to be delayed for our immigrant neighbors, for Black and brown folks,” Rep. Ayanna Pressley told TheGrio. “We owe it to the people to be bold, to be responsive to their needs.”

U.S. Congresswoman Maxine Waters has been “pissed” since her meeting with White House officials on the immigration patrol agents at the United States-Mexico border.

Waters along with others around the world were triggered by the images of border patrol agents whipping the Haitian and Black migrants who were looking for asylum after crossing 11 borders from South America to the southern border.

As the White House awaits an investigation on the matter conducted by the U.S. Department of Homeland Security, a House resolution is being proposed to establish a ‘‘National African Immigrant Heritage Month’’ in September that would celebrate the contributions of Americans of African immigrant heritage in the United States.

The resolution, which is sponsored by Reps. Ritchie Torres and Yvette Clarke, comes at a time when the United States faces a rise in anti-immigrant rhetoric that threatens to poison the nation’s democracy.

“This resolution aims to elevate and celebrate the contributions of the African diaspora to our nation. It would grant federal recognition to the enormous accomplishments of African immigrant communities while highlighting the need to fight disparities within the greater Black population in America,” Torres told TheGrio.

“From America’s founding and beyond, our story has been made possible only through the unique contributions of Americans of African heritage. The country we share has been built and enriched through African culture and conceptions and has reached otherwise impossible heights,” Clarke told TheGrio. “This resolution is a necessary step toward recognizing America’s history, and honoring the African heritage intrinsically tied to our foundation. I am proud to co-lead this critical legislation and I look forward to its swift passage.”

It is estimated that more than 2 million immigrants from African countries live in the U.S., and speak over 2,000 languages.

“Understanding that Black migrants, when they come, they get jobs, they go to school. They’re the most educated migrants,” said Nana Gyamfi, executive director of Black Alliance for Just Immigration. 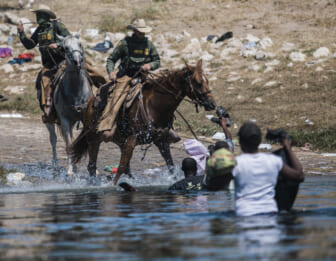 At a time when a spotlight is on immigration, the Haitian migrant crisis has reminded the United States that the issue is also one that impacts Black America.

TheGrio earlier reported that addressing the Haitian migrant influx was among the White House’s Black agenda items, but until a budget is passed and infrastructure deal is secured, progress on the list remains stalled. The hold up has some members of Congress like Rep. Ayanna Pressley of Massachusetts fired up.

“Justice continues to be delayed for our immigrant neighbors, for Black and brown folks,” Pressley told TheGrio. “We owe it to the people to be bold, to be responsive to their needs.”