Texas Governor Greg Abbott is offering jobs to border agents on horseback who were punished for charging at Haitian migrants.

The governor of Texas is offering jobs to border agents who might be fired for swinging reins and charging at Haitian migrants on horseback after the images stunned the nation.

President Joe Biden called their actions “outrageous” and proclaimed “Those people will pay.”

“I will give you the words of Border Patrol agents themselves, in Del Rio, when they said that the surge of migrants across the border was stopped only when the Texas Department of Public Safety and the National Guard showed up to provide a steel barrier to prevent the migrants from coming across,” Abbott declared. “Texas has imposed a policy where we are going to arrest and jail people who are coming across the border for trespassing into areas, into the state of Texas.” 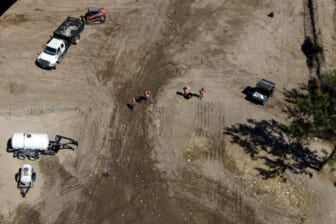 Abbott told Chris Wallace on Fox News Sunday the agents “wouldn’t have been in that situation had the Biden administration enforced the immigration laws and secured the border in the first place.”

He said “the person who took those pictures said that the characterization that the Democrats have made about the Border Patrol using them as whips, whipping people who were coming across the border is false. They were simply maneuvering horses.”

In response to statements from Biden, Abbott declared, “I will tell you is what the president said, going after the Border Patrol, who were risking their lives and working so hard to try to secure the border, if he takes any action against them whatsoever, I have worked side-by-side with those Border Patrol agents. I want them to know something. If they are at risk of losing their job … you have a job in the state of Texas. I will hire you to help Texas secure our border.”

As previously reported, Haitian migrants fled into the border town of Del Rio, Texas with the hope of finding asylum in the U.S. and escaping the calamities in their country after the July 1 assassination of Haiti President Jovenel Moïse and several natural disasters.

In a converse opinion to Abbott, Massachusetts Congresswoman Ayanna Pressley said last week that America “cannot and must not look away in this moment.”

“Haitian lives are Black lives, and if we truly believe that Black lives matter, then we must reverse course,” said Pressley. “The Biden administration must immediately and indefinitely halt all deportations of Haitian migrants.”

“It must affirm and guarantee the right to due process for those seeking asylum,” she maintained, “and it must use every resource available to support those fleeing this humanitarian crisis on the island.”