The new series BMF has already been renewed for a second season after its highly-rated premiere last Sunday night on STARZ.

The crime drama explores the life story of the Flenory family and is set in 1980s Detroit. It stars Da’Vinchi as Terry Flenory and Demetrius “Lil Meech” Flenory, Jr., who is portraying his own father in the leading role.

In a recent, exclusive report, Flenory, Jr. said he took acting lessons for two years before the show’s debut.

In an exclusive interview with theGrio, the younger Flenory admitted that playing his father, Big Meech, on BMF was “big shoes to fill.” He revealed that in preparation for the role, producer Curtis “50 Cent” Jackson planted him in acting classes for two years.

“He made sure, you know, I had the foundational acting before I just jumped out there on screen and didn’t have any acting experience, you know, as far as any classes,” said Lil Meech. “(I took) intense acting classes, five days a week, (sometimes) two times a day, for two years.”

According to Shadow and Act reporting, BMF ranks as “one of the most highly engaged series premieres ever, with a strong completion rate across OTT platforms based on preliminary reporting.” 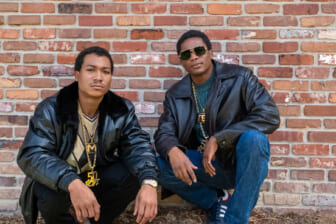 In its description, network officials describe the show as one about the relationships in this clan of blood and deed, ultimately the brothers’ relationship and eventual estrangement as they built one of the most infamous drug organizations in history.

They note the Flenory men’s “unwavering belief in family loyalty would be the cornerstone of their partnership and the crux of their eventual estrangement. This is a story about love, kinship and capitalism in the pursuit of the American dream.”