The athletes, Ruth Bader Ginsburg said, showed contempt for those who "made it possible for their parents and grandparents."

Former Today anchor Katie Couric admits that she purposefully edited out comments that the late Supreme Court Justice Ruth Bader Ginsburg made in their 2016 interview.

In the interview — which was published by Yahoo News, where Couric was global news anchor at the time — she asked Ginsburg about then-San Francisco 49ers quarterback Colin Kaepernick and others who refused to stand during the playing of the national anthem before NFL games. Replied Ginsburg: “I think it’s really dumb of them.”

“Would I arrest them for doing it? No,” Ginsburg elaborated. “I think it’s dumb and disrespectful. I would have the same answer if you asked me about flag burning. I think it’s a terrible thing to do, but I wouldn’t lock a person up for doing it. I would point out how ridiculous it seems to me to do such an act.”

Couric then asked, “But when it comes to these football players, you may find their actions offensive, but what you’re saying is, it’s within their rights to exercise those actions?”

In her new memoir, Going There, Couric says she edited out another of Ginsburg’s responses to a question about athletes, particularly NFL players, who were kneeling in protest. Couric wrote that Ginsburg declared the athletes were showing “contempt for a government that has made it possible for their parents and grandparents to live a decent life.”

The then-83-year-old justice continued: “Which they probably could not have lived in the places they came from … as they became older, they realize that this was youthful folly. And that’s why education is important.” 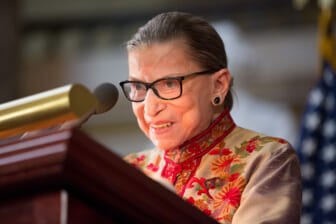 According to a new report in The Daily Mail, Couric writes in her memoir that she edited out the comments because they were “unworthy of a crusader for equality” like Ginsburg.

Couric writes that the day after their sit-down, the Supreme Court’s head of public affairs emailed her, saying Ginsburg had “misspoken” and asking that those comments not be in her pending story.

Couric notes that she asked a fellow journalist what to do, and David Brooks, the New York Times columnist, advised her that Ginsburg may not have understood the question. Couric said she was conflicted because, as a Supreme Court Justice, Ginsburg’s thoughts were important for people to hear, but as a fan, she allowed her personal politics to influence her editing decision.

Ginsburg died in September 2020, and was succeeded by Amy Coney Barrett, who was nominated just weeks before the 2020 presidential election by then-President Donald Trump.

Couric’s memoir will be released on October 26, and previewers have already criticized its confrontational stance as the veteran newswoman reportedly rips into her former colleagues, including co-stars and producers.