The brother of Kansas City Chiefs quarterback Patrick Mahomes is under fire for a TikTok video he posted that showed him dancing on Sean Taylor’s retired number at FedExField in Maryland during Sunday’s game.

Jackson Mahomes, 21, is catching major heat for a now-deleted TikTok he recorded during the Washington Football Team Vs. Kansas City Chiefs game. The clip shows him on the sidelines dancing on a tribute to late Washington player Sean Taylor, who died in 2007. Jackson is seen busting a move inside an area at FedExField where the grass is painted with Taylor’s jersey number (21), Yahoo reports.

Jackson issued a statement on Twitter apologizing after his post sparked swift backlash on social media. He wrote, “I want to sincerely apologize for accidentally being on the Sean Taylor #21 at FedEx Field. We were directed to stand in that area and I meant absolutely no disrespect to him or his family.”

The Washington Football Team retired Taylor’s number during Sunday’s game, per PEOPLE. As part of the on-field ceremony, the team had Taylor’s number painted on the sideline on the visitor’s side of the field. Mahomes filmed himself dancing in this area for his nearly one million Tik Tok followers, but fans of the Washington Football Team were not impressed.

Amid the backlash, sports reporter Chad Ryan took to Twitter to inquire why anyone was allowed to stand on Taylor’s logo to begin with.

One Twitter user noted, “I can’t help but feel sorry for Patrick Mahomes, he is insanely talented and seems to be a class act, and then he has a mom and wife who can’t lose with grace and a coattail riding little brother who dances on a memorial and pours water on the opposing teams fans.”

Another added, “Perhaps Mahomes is distracted by his wife, mother, and brother’s antics on Twitter. Perhaps they should stay off Twitter.  Perhaps his less than par play this season is due to these familial distractions. Love Patrick! His family not so much!”

A third wrote, “I mean sure… but the blame should really be on WFT for designating that area for opposing fans with field passes.”

Taylor, a safety, was fatally shot at his Florida home in 2007, theGrio previously reported. He was 24.

Taylor was at home nursing an injury instead of taking the field with his Washington Redskins teammates for a road game at Tampa. Unfortunately, a group of young men from southwest Florida apparently didn’t know that.

Prosecutors say the suspects drove across the state intending to burglarize Taylor’s Miami-area home, confident he wouldn’t be there. When the 6-foot-2, 230-pound player — well known as a ferocious hitter — confronted them with a machete early on Nov. 26, 2007, Eric Rivera Jr. allegedly fired two shots. One missed. The other hit Taylor in the upper leg, causing massive blood loss that led to his death a day later.

Rivera was charged with first-degree murder. Four other people were also charged in the case. 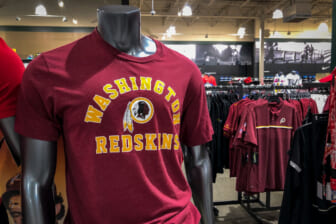 Taylor quickly became a starter and was nicknamed “Meast” by teammates — a combination of man and beast — because of his hard-hitting style. He was named to the Pro Bowl after the 2006 season and was also very popular among Redskins players and fans.

The Redskins contributed $500,000 to a fund for Taylor’s young daughter after he died.