The hit HBO series Succession is back for a third season and Sanaa Lathan is killing it in her role as a corporate lawyer.

Interestingly, the Love & Basketball star almost turned down the chance to appear in the third season. In a recent interview with Entertainment Weekly, Lathan said she’d never seen the show before. 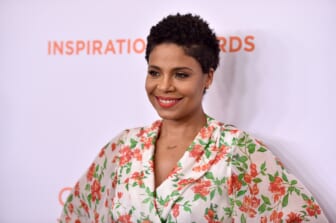 Also Read:
Sanaa Lathan quit drinking three years ago because it was ‘dimming my energy’

“It was interesting, because I had heard about the show, obviously, but I hadn’t watched it,” she explained. “It was an offer. It was in the fall of 2020. It was still that scary pandemic time and I hadn’t traveled. I had to leave L.A. and go to New York and I said to myself, ‘I don’t know if I’m going to do this.’

And then I did my homework and watched the first season and the second season in three days because I was so obsessed, and I said, ‘I have to be a part of this.'”

In the show, Lathan stars as Lisa Arthur, a high-powered, well-connected star lawyer. She takes on big cases to be in front of the camera and in doing so, becomes involved with the Roys. The HBO drama follows the Roy family who controls the biggest media and entertainment company in the world.

For the role, Lathan explained that she was required to rely on improv, something she’s not necessarily used to doing.

“That’s part of their whole system,” she told EW. “It’s so well written that you don’t have to do the improv, but they always give you a take where you can. It’s scary-slash-thrilling, but sometimes really great stuff comes out of it. The writing gives you a great springboard to come up with ideas. I wouldn’t necessarily want to improvise if the writing was s—.”

Luckily, she says a previous role helped prepare her for her current one. “Slaying that alien f—ing creature definitely gave me some skills to handle some of these characters,” she said of starring in 2004’s Alien v. Predator.

Fans are loving Lathan in her new role. “I think Sanaa’s four mins on-screen already mark a record for a Black character on this show,” one Twitter user wrote.

“When Sanaa Lathan appeared on screen,” another posted, along with a gif of an audience cheering and standing.

Succession’s third season debut was watched by 1.4M viewers across all streaming and cable platforms, per Variety. Not only was it the series’ most-watched episode so far, but it was also the most-watched premiere of any HBO series since the network launched its Max streaming service in May of 2020.