Colin Powell praised wife, Alma, in one of his final interviews

Scratch the surface of almost any story about Colin Powell or one he authored, and you will find Alma Johnson-Powell.

The two first crossed paths in 1962. Before the dawn of a civil rights movement, before integration, Colin and Alma met and got married. The two have three children, Linda, Michael and Annemarie, and four grandkids.

According to reporting from Bob Woodward of The Washington Post, Powell was upbeat prior to his passing early Monday of complications from COVID-19. At 84, he had survived Vietnam, the Iraq War, Washington politics and several White House administrations.

The award-winning journalist spoke with Powell earlier this year.

“I’ve got multiple myeloma cancer, and I’ve got Parkinson’s disease. But otherwise, I’m fine,” Powell told Woodward in a July interview, some of which was played on MSNBC’s Morning Joe and on CNN early Tuesday.

And in the audio recording, he rejected any expressions of sorrow at his condition.

According to The Washington Post, Powell’s last interview was July 12 of this year. 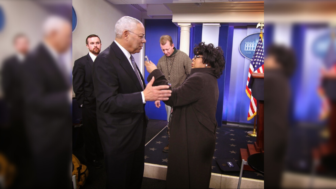 He talked about how he sometimes shows up for doctor’s appointments: “I’ve taken lots of exams, and I get there on my own. I drive up in my Corvette, get out of the Corvette, and go into the hospital. I also go to a clinic to get the blood tests taken. “I don’t advertise it, I don’t make an announcement about it, but most of my friends know it.”

At one point during the interview, the former secretary of state responds to his wife.

“I’m on the phone, Alma!” he said, shouting back to her, and then, in a whisper, he tells Woodward, “She never liked me talking to you, but here we are.” 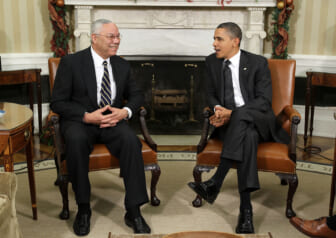 Woodward wrote that he asked Powell — America’s first Black national security adviser, first Black Joint Chiefs of Staff chair and first Black secretary of state — “Who was the greatest man, woman or person you have ever known? Not … a leader, not necessarily, but the inner person. You know, the moral compass, the sense of propriety, the sense of the truth matters. Who is that in all of your life? Who?”

“It’s Alma Powell,” he said immediately. “She was with me the whole time. We’ve been married 58 years. And she put up with a lot. She took care of the kids when I was, you know, running around. And she was always there for me, and she’d tell me, ‘That’s not a good idea.’ She was usually right.”

Earlier this month, Alma Powell tested positive for coronavirus, according to reports, although she has been vaccinated. Her husband, who was also vaccinated, was set to receive his booster shot, yet fell so ill that he was unable to get it.