Monday morning was a normal day. I was taking my daughter to school listening to music when I received two back-to-back text messages that informed me that General Colin Powell had died.

As I reflect in shock on Powell and the man and leader he was, I recall many fond memories. In every encounter I had with him, Powell always recognized our commonality as Black Americans occupying these historic and predominantly white spaces in Washington.

One moment that stands out is when the nation was glued to the TV set for then Secretary of State Powell’s Capitol Hill testimony on the Iraq War. Not long after his testimony, I wandered to the White House press office and noticed a familiar head of hair coming up the steps. Powell’s head was bowed and his right arm was filled with a file of papers. He looked as if the weight of the world was on his shoulders — and it was.

I shouted out to him, “One is the loneliest number.”

Powell then raised his head, smiled and walked over to me. We began chatting as he was on his way somewhere in the West Wing to detail what just happened on the Hill. He spoke with me by phone on several occasions when providing his wealth of insight to understanding political and policy issues.

Powell was also gracious enough to allow me to interview him for my first book, The Presidency in Black and White, detailing my years as a White House correspondent. At each meeting, he gave me a knowing and approving smile. On occasion, he would even reach out to tell me that he was watching me on television. 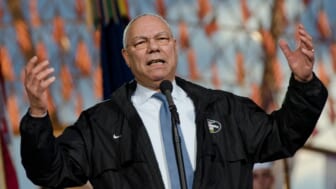 Even with all his dignity, Powell never shied away from me as a Black reporter asking questions about Black America in a town that didn’t always want to answer those questions.

Prior to working at the White House, Powell was a childhood hero of mine. Little did I know, that childhood hero would later in life become a friend and supporter in a space that is not known to be as gracious. His realness always shined through his stately demeanor.

Colin Powell’s death is shaking the rafters ultimately because there were not many who stood as he did. As his family’s statement announcing his passing said, “We have lost a remarkable and loving husband, father, grandfather and a great American.”

Valerie Jarrett, former senior advisor to then President Barack Obama told theGrio exclusively he was a “remarkable public servant who broke through racial barriers to reach the very top of his profession. A man of character and integrity who put country over politics.”

Powell was a Republican (in 2020, he said he no longer considered himself a Republican) who believed in equity and equality and stood on those principles even when the applause was not so great.

I recall covering the 2000 Republican National Convention in Philadelphia where Powell received a standing ovation as he walked out and spoke of those Republican principles but also challenged the crowd to be the “party of Lincoln.” The former chairman of Joint Chiefs of Staff challenged the room of Republicans to “earn the mantle of Lincoln” and “always be a party of inclusion.”

The roar of the crowd dropped when he touched on issues of affirmative action.

With only the boldness he could offer — as he had already stood down enemies from opposing militaries overseas — Powell brought attention to America’s issue of race to a room with a majority of folks who did not align with his views.

Then years later, in 2008, Powell shocked the world by endorsing a politically young then-Senator Barack Obama, a Black man from the opposing political party. Before this endorsement, Obama had met with Powell to discuss his run. Powell’s announcement was made public on the historic Sunday NBC show, Meet the Press.

Powell told Tom Brokaw, who was hosting the show at that time, “I have some concerns about the direction that the [Republican] party has taken in recent years. It has moved more to the right than I would like to see it.”

The former Secretary of State at that time had known then Republican presidential candidate Senator John McCain for 25 year and Obama for only two. When it came to his discussion on Obama, Powell said, “You have to pass the test of do you have enough experience and do you bring the judgement to the table that would give us confidence that you would be a good president.”

Secretary Powell was clear in his determinations about McCain, who at the time Powell felt did not have a good grasp of how to get the nation out of recession. Another issue that compounded the problem was McCain’s choice of Sarah Palin as his vice president — who based on the presidential line of succession could ultimately become president of the United States. Powell felt that Palin was not ready.

Powell felt that Barack Obama had a definitive way of doing business that would serve the nation well. In a seven-week span of Powell assessing the presidential and vice presidential candidates, he found the McCain-Palin ticket had a more narrow approach versus the Obama-Biden ticket that was more inclusive and had broader reach into the needs of the American people.

Powell adamantly showed his disdain with senior Republicans falsely suggesting that Obama was a Muslim. “Well, the correct answer is, he is not a Muslim, he’s a Christian. He’s always been a Christian,” Powell exclaimed.

Powell expressed how troubled he was that in his own party would “have these kinds of expressions.”

Secretary Powell’s public support for Obama pushed the Illinois senator closer to the White House. “I have come to the conclusion, that because of his ability to inspire, because of the inclusive nature of his campaign, because he is reaching out to all across America, because of who he is and his rhetorical abilities we have to take that into account,” said Powell of his endorsement.

Obama in his official statement reacting to Powell’s death reflected on that crucial endorsement:

“On a personal level, I was deeply appreciative that someone like General Powell, who had been associated with Republican administrations in the past, was willing to endorse me in 2008. But what impressed me even more was how he did it. At a time when conspiracy theories were swirling, with some questioning my faith, General Powell took the opportunity to get to the heart of the matter in a way only he could … Michelle and I will always look to General Powell as an example of what America – and Americans – can and should be if we wish to remain the last, best hope of earth.”

Ben Jealous, the former president of the NAACP, said Colin Powell was a statesman that almost no longer exists in our nation.

“He was committed to working with everybody to get the most important things done,” Jealous remembered about Powell while speaking to theGrio. “Washington has been in gridlock for more than a decade; he was a leader from an earlier time who reached across party lines working for the greater good.”

Jealous honored Powell in 2011 with an NAACP Image Award. That same year, the iconic entertainer, Prince, was also honored. Jealous recalls Powell, regarded as a political and military icon, having a human moment when he expressed regret that Prince did not perform that night.

When it came to Capitol insurrection on Jan. 6, Powell with his breadth of knowledge and history, called the event a “disgrace” and something the nation had never seen before. The General likened it to the Rodney King riots in 1992 when he served as chairman of the Joint Chiefs of Staff. During a segment on MSNBC with Mika Brzezinski, Powell remembered “the president said send in the troops and we did and brought it to a conclusion.”

He also took the time to recall how Donald Trump came into political power by falsely claiming that Barack Obama wasn’t a U.S.-born citizen. Powell emphatically denounced Trump and called for him to do what former President Richard Nixon did and resign in the final 12 days of his presidency.

Because of political stature, Powell at one time was considered the first-ever viable choice of a Black man to become president of the United States. The Secretary, however, declined to run due to family considerations. At that time, America was not a nation as openly engaged in racial equity and equality as it is today.

In November of 1996, Powell took himself out of consideration when he said it required a “passion and commitment” he did not yet feel. Powell went on to advise presidents and, with his endorsement of Obama for president, became a political kingmaker.

Now amid his shocking death, Powell’s legacy is cemented as a warrior and true patriot for his country.