The widow of the late NBA star said she learned about her husband's death on social media.

The widow of Kobe Bryant scored a legal victory in her lawsuit against Los Angeles County over the leaked photos of her dead husband and their teenaged daughter Gianna.

Vanessa Bryant requested that the county sheriff and fire chief answer questions under oath about the helicopter crash site photos as part of a civil lawsuit filed by Bryant and family members of the other victims who perished, USA TODAY Sports reports. 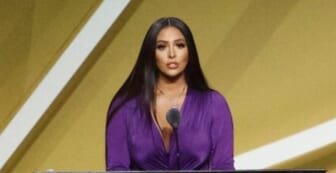 Kobe and seven others, including his 13-year-old Gianna, were killed on Jan. 26, 2020 when the helicopter they were aboard, on their way to a girls basketball tournament, crashed in the hills west of Los Angeles amid foggy weather. Federal safety officials blamed pilot error for the wreck.

Vanessa said she learned about their deaths on social media — hours before she received official confirmation from the Los Angeles Sheriff’s Department.

On Tuesday, U.S. Magistrate Judge Charles Eick granted Vanessa’s request and ruled that LA County Sheriff Alex Villanueva and County Fire Chief Daryl Osby will have to give pre-trial testimony about the photos that first responders took at the crash site. The pictures caused the victim’s family members emotional distress, according to court documents viewed by the New York Post.

The ruling is a major blow for the county, which sought to block Villanueva and Osby’s testimony, arguing that they are heads of government agencies, and such individuals “are not normally subject to deposition, absent extraordinary circumstances.”

That exemption protects officials “from discovery that will burden the performance of their duties, particularly given the frequency with which such officials are likely to be named in lawsuits.”

“While we disagree with the court’s decision, we will make both the Sheriff and Fire Chief available for deposition,” reads the statement from attorney Skip Miller, who is defending the county. “Their testimony will not change the fact that there is no evidence any photos taken by County first responders have ever been publicly disseminated.”

Vanessa said she pleaded with Villanueva to make sure no one takes photographs of the site. Her federal lawsuit against the county claims she has experienced “severe emotional distress” that has compounded the trauma of losing her husband and daughter. The lawsuit contends first responders, including firefighters and sheriff’s deputies, shared photographs of Kobe’s body with a bartender and passed around “gratuitous photos of the dead children, parents and coaches.”

“Villanueva personally promised Mrs. Bryant that he would protect the remains of her husband and daughter from desecration by unauthorized photographers,” said the legal document submitted by Bryant’s attorney, Luis Li. “He personally described the sharing of photos of human remains by law enforcement officers as a problem as old as the Polaroid camera, and he noted that police officers keep so-called ‘death books’ of such photos.”

As part of the legal battle, Los Angeles County is seeking to compel psychiatric evaluations for Vanessa and others to determine if they truly suffered emotional distress over images that did not appear in mainstream news coverage or in published reports about Kobe’s death.