theGrio has the latest in reality TV news from the week.

From The Real Housewives of Potomac taking over daytime TV to Kenya Moore’s spooky choreography on Dancing with the Stars, theGrio is back with your Reality Roundup of the week. 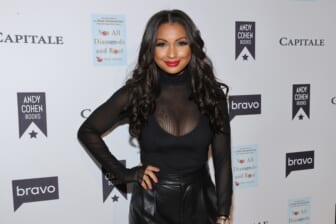 With Garcelle Beauvais as a co-host, The Real is no stranger to reality TV stars (Beauvais joined The Real Housewives of Beverly Hills in 2020.) This week, however, the daytime talk show got some extra reality juice as all of the Real Housewives of Potomac flew out to LA to dish on everything season 6 and their highly anticipated reunion.

The “Grand Dame” Karen Huger told the co-hosts, “It’s reality. Women, we get along sometimes, sometimes we don’t.” While she agreed that sometimes it can get very mean on their show, she said, “we never go so far, some of us, that we can’t come back and say, ‘Look I’m sorry, let’s move on.'”

While on The Real, Candiace Dillard Bassett and newbie Mia Thornton broke down their altercation that had all of the fans talking this season. While on their cast trip, the two housewives got into it over comments made about their mothers, Bassett’s music career, and more, ultimately leading to salad being thrown across a kitchen.

“I come in peace at all times, but I always say I’m always home, my porch light is on, if you come to my door I answer and you receive the smoke,” Bassett dished on the show. “Mia came to my door, with the smoke, and I was home!” She added that Thornton really hurt her feelings when she criticized her music and album Deep Space.

Thornton shared that she completely forgot about the altercation until watching the show. She told the co-hosts, “When I saw myself in that trailer…I forgot I threw the lettuce!”

Cynthia Bailey gets the word on the street

While “the word on the street” of Potomac, Gizelle Bryant, was in Los Angeles to visit The Real, she also stopped by E! Daily Pop, which was guest co-hosted this week by Real Housewives of Atlanta alum Cynthia Bailey. While on the show, Bryant spilled on her relationship with Karen Huger: “I think Karen loves to say my name…it’s a very beautiful name, so I’m not mad at her!”

Dorit Kemsley was robbed at gunpoint

In a horrifying story, Real Housewife of Beverly Hills star Dorit Kemsley was robbed at gunpoint Wednesday evening, mere hours after the RHOBH reunion aired on Bravo. Per a police spokesperson who spoke with “E! News,” “the incident took place the night of Wednesday, Oct. 27…three male suspects took property from the house, located in Encino, Calif.”

Kelsey was home with her two children,  Jagger, 7, and Phoenix, 5, when the suspects entered the home through a rear window. While the children remained asleep in their rooms, Kemsley simply told them, “Don’t hurt my babies. Don’t kill me. I’m a mother.”

Unfortunately, Team Twirl’s time on Dancing with the Stars has come to a close. Kenya Moore was eliminated from the dancing competition series on Monday night’s Halloween-themed episode. She shared after getting eliminated, “I just want to say thank you so much for this opportunity. This has been a dream come true…I have so much respect for all of you, and all of you; I love you guys so much!”

Moore appeared on The Ellen DeGeneres Show hosted by Tiffany Haddish, and opened up about her time on Dancing, the new season of RHOA, and more.

Check out her interview below: