Tina Tintor, 23, and her dog were killed after her vehicle was struck by one driven by Ruggs, the now-former Las Vegas Raiders wide receiver.

The woman killed in a car crash after her vehicle was struck by one driven by former Las Vegas Raiders wide receiver Henry Ruggs III has been identified as Tina Tintor. She was 23 years old.

According to a police report obtained by Fox News, Ruggs was driving approximately 156 mph when he crashed into Tintor’s Toyota RAV4 early Tuesday morning in Sin City.

Ruggs, 22, has been charged with felony DUI and reckless driving and faces a sentence of up to 20 years in prison.

He appeared in court Wednesday after being released from University Medical Center. Police allege that Ruggs’ blood-alcohol level at the time of the crash was more than twice the legal limit, and that a loaded gun was in the Chevrolet Corvette he was driving.

According to the report, Ruggs refused to take a sobriety test at the scene, and his blood alcohol was tested via samples at the hospital after a warrant was obtained.

Several witnesses told responding officers that they attempted to rescue Tintor from the vehicle, but she was pinned inside, and they were ultimately “overcome with smoke and heat from the flames.”

“The family’s torn apart, as anybody would be,” Clark County District Attorney Steve Wolfson told The Las Vegas Review-Journal. “This was a terrible, terrible collision, so they’re mourning their loss. They’re grieving. They’re mad.” 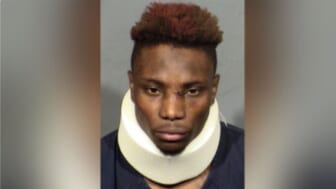 The Review-Journal notes that Tintor and Ruggs were both near their homes at the time of the crash. The young woman lived three miles away from the former NFL wide receiver.

When Ruggs appeared in court, wearing a neck brace and in a wheelchair, prosecutors confirmed that he was driving 156 mph at the time of the crash. Judge Joe Bonaventure said he could not recall seeing someone driving that fast in his career, according to KLAS.

Also in Ruggs’ vehicle was his longtime girlfriend, Kiara Kilgo-Washington, with whom he shares a daughter. 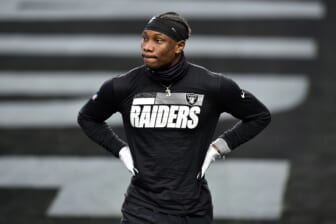 Ruggs was ordered held on $150,000 bail, with electronic monitoring required, and also ordered to abstain from alcohol and all driving.

The once-heralded wide receiver was released by the Las Vegas Raiders on the same day as the crash. His former team issued a statement late Tuesday morning, saying: “We are devastated by the loss of life and our thoughts and prayers go out to the victim’s family. We are in the process of gathering information and will have no further comment at this time.”

As previously reported, Ruggs is represented by attorneys David Chesnoff and Richard Schonfeld, who released the following statement shortly after the crash: “On behalf of our client Henry Ruggs III, we are conducting our own investigation as of this writing and ask everyone to reserve judgment until all the facts are gathered.”