Dusty Baker gets contract from Houston Astros for 2022

Dusty Baker will return as manager of the Houston Astros for a third season after agreeing to a one-year contract with the AL champions.

Baker took over from AJ Hinch, who was suspended by MLB for his role in the team’s sign stealing and then fired. The Astros lost to Tampa Bay in the 2020 AL Championship Series and to Atlanta in this year’s six-game World Series.

“We have an exciting future here — and present,” Baker said Friday. “I just had some unfinished business to take care of, but we’re close. We’re getting better every year.”

The 72-year-old Baker has never won a World Series title as a manager. He has 1,987 regular-season wins as a manager.

Baker said he has enjoyed his time in Houston, even adapting to the team’s focus on analytics.

“I was talking to some of our sabermetrics guys, and I said, ‘Hey, I guess you can teach an old dog new tricks,’ and they said, ‘Depends on the dog,’” Baker said with a grin. “That was a compliment, I guess.”

Owner Jim Crane said he expects the team’s payroll to be near the luxury tax level and possibly above. Negotiations between Major League Baseball and the players’ association are ongoing to set rules for after Dec. 1.

“If we have to make a move to compete and close out something, we’ve always done that,” Crane said. “We’ve got the resources because we’ve got great support from the city. Our goal is to win championships and put the best team on the field that we can.”

“Hopefully, we’ll be able to get something done.” Crane said. 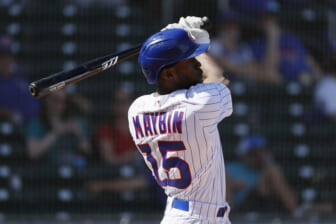 Also Read:
MLB to invest up to $150M to improve Black representation

Click said he hopes Baker’s coaching staff will return, except for pitching coach Brent Strom, who is retiring after eight seasons.

“We had talked about it earlier in the year last year, but I urged him to put all of his efforts into this year and not think about the end until the end came,” Baker said.

Baker said he believes assistant pitching coaches Bill Murphy and Josh Miller are ready to take the next steps in their careers and could be leading candidates to replace Strom.

Among Houston’s other key free agents are Justin Verlander, who pitched just one game in the last two seasons because of injuries, and Zack Greinke.