Travis Scott has been served a second lawsuit after a violent “crowd surge” killed at least eight attendees of the rapper’s sold-out Astroworld music festival on Friday night in Houston — and the latest claim lists Drake as a defendant, according to TMZ.

The rappers and multiple-time collaborators were named alongside entertainment company Live Nation in a negligence lawsuit filed by Astroworld attendee Kristian Paredes, 23, who is seeking a minimum of $1 million in damages from the deadly event, per TMZ.

Paredes alleges in the suit that Scott and Drake helped “incite” the crowd on Friday night, failing to call for safety measures once it became clear that fans had become excessively rowdy.

On Saturday came the first lawsuit naming both Live Nation and Scott, filed by concertgoer Manuel Souza, who shared Paredes’ sentiments about an overall lack of planning and organization around event safety.

“Defendants failed to properly plan and conduct the concert in a safe manner,” wrote Steve Kherkher, Souza’s attorney, in lawsuit obtained by Billboard. “Instead, they consciously ignored the extreme risks of harm to concertgoers, and, in some cases actively encouraged and fomented dangerous behaviors.”

Festival organizers are also accused in the suit of ignoring red flags throughout the day leading up to the incident, including when concertgoers allegedly “breached a security gate around the park, stampeded into the premises, and trampled over one another” causing “serious obvious injury” to many. 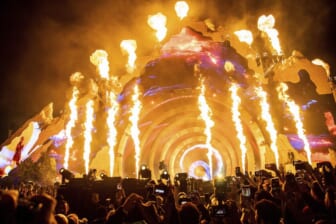 Souza claimed in the suit that organizers “made the conscious decision to let the show go on” even once paramedics began tending to wounded crowd members, “despite the extreme risk of harm to concertgoers that was escalating by the moment.”

“Eventually, due to defendants’ active decision to let the show go on, the scene devolved into a complete melee, resulting in the needless, untimely death of at least 8 people and injuries to scores of others,” wrote Souza’s attorneys, according to Billboard.

“I’m absolutely devastated by what took place last night,” Scott wrote in a tweet the morning after the chaos. “My prayers go out to the families and all those impacted by what happened at Astroworld Festival. Houston PD has my total support as they continue to look into the tragic loss of life.”

“I am committed to working together with the Houston community to heal and support the families in need. Thank you to Houston PD, Fire Department and NRG Park for their immediate response and support,” he added. “Love You All.”

The Associated Press reported that droves of the estimated 50,000 attendees began rushing towards the stage at the NRG Park stadium, “squeezing fans so tightly together that they could not breathe or move their arms,” according to witnesses.

Scott, real name Jacques Berman Webster II, announced in April that the third edition of the festival, named after the Grammy-winning rapper’s third studio album, would add an extra day of shows, as reported by Rolling Stone.

Astroworld Fest officials canceled Saturday’s lineup after the deadly event, shortening what was originally scheduled to be a two-day music festival, according to NBC News.

Rapper Roddy Ricch, one of the festival’s guests, announced via his Instagram Story Sunday that he will be giving his earnings from the event back to those impacted by the events.

“I’ll be donating my net compensation to the families of this incident,” Ricch wrote.