The Emmy Award-winning screenwriter for Master of None, her creative partner Risha Rajani, and their production company, Hillman Grad, are working on a scripted drama inspired by the classic documentary film Hoop Dreams in conjunction with the deal, according to Deadline. 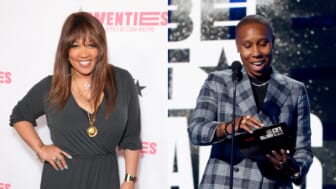 The developing series will tell the tale of two Black high school basketball stars chasing NBA dreams as they navigate social hurdles and obstacles growing up in Waithe’s hometown of Chicago in the 1990s. The original Hoop Dreams documentary told a similar, real-life story about Chicago basketball legends William Gates and Arthur Agee.

“Hoop Dreams was a very important documentary in my life growing up, it was right in my own backyard,” Waithe recently told Deadline. “I was seeing two young Black people with dreams bigger than their backyard and watching their journeys as they also struggled and tried to understand where they fit in their families.”

“I always knew I wanted to bring that story back because Hoop Dreams, to me, is so representative of what it means to have a dream, to be from a city that you really believe in, and you’re really proud to be from.”

Deadline reports Hoop Dreams director Steve James and his fellow producers Peter Gilbert and Frederick Marx are all reportedly working with Waithe to develop the new project, which she said is a priority for her.

“I didn’t want to announce or talk about Hoop Dreams until they had been contacted by the filmmakers to know that we were doing this,” she said. “Even though we aren’t going to base characters on them per se, we’re going to do something set in the 90s, some kids with a dream, so it will be in a similar vein. It was so important that they know that these stories will be handled with care, the title will be handled with care.”

The original Hoop Dreams was infamously snubbed by the Oscars for a Best Documentary Academy Award nod, despite winning an award for Best Film Editing. The developing new series is Waithe’s latest Chi-town inspired creative endeavor. Her hit Showtime drama The Chi, which debuted in 2018, completed its fourth season this summer.

Earlier this year, Waithe’s production company signed a deal with Def Jam to “develop the next generation of underrepresented artists.” The first season of her Amazon horror series Them, about a Black family terrorized by their new white neighbors after moving to suburban Los Angeles, received mixed reviews from critics and audiences after its April debut.