In an exciting panel for the American Black Film Festival, theGrio’s Cortney Wills sat down with Jonathan Majors and Zazie Beetz from Netflix’s film, The Harder They Fall.

As theGrio previously reported, The Harder They Fall is one of this year’s most exciting films. With a star-studded cast including Majors, Beetz, Regina King, Idris Elba and more, the film fuses Black music, fashion and culture with the Western genre, which has not typically had Black people in the forefront. 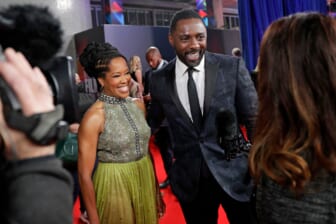 Speaking to Wills, Majors and Beetz broke down making a film like this during the pandemic, how they cultivated their chemistry and more.

“It’s kind of a fever pitch, all of it,” Majors explained. “The revenge, the friendship, the brotherhood, the sisterhood, the sense of community and in our case, the love is at a very unique frequency. I think in all of those categories there was a real aggression to really meet the bar for the story.”

Beetz chimed in on the work they did together to develop their chemistry.

Speaking to Majors, she said, “You and I really took the time to talk about where they were at before the film…essentially the emotional moment before.”

By doing the character work to develop their histories, she revealed they were able to “imbue those elements into the moments they were performing.”

They also both have respect and care for each other as actors, Beetz explained. “We rehearsed and we just thought it through.”

Beetz and Majors also opened up about the stacked ensemble cast and described what the dynamic was like on the set of the film, especially as it was shot during the pandemic.

“We could only have made this film with these people, at this time, because it took a certain amount of individual strength or fortitude,” Majors explained. “I think the pandemic, I know it did, it added a stressor to the piece. There’s a certain amount of, you know, ‘Are we really gonna do it?'”

Majors gave credit to every single person on the film for being able to survive and stay strong amidst such stress. “That speaks to the power and the commitment to the project, and I think that power and commitment also manifests itself into its performance and presence when you actually have to shoot on the day.”

Check out the entire conversation here.