Authorities were still searching Sunday morning for the man they say accidentally discharged a firearm Saturday afternoon at Hartsfield-Jackson International Airport in Atlanta, causing widespread panic there as travelers ran for their lives.

Some feared yet another mass shooting was taking place, but so far those fears turned out to be unfounded.

Video of the chaos that erupted circulated widely on social media on Saturday, showing crowds of people running through the airport, knocking down stanchions and later standing in the parking lot and on the airport tarmac. 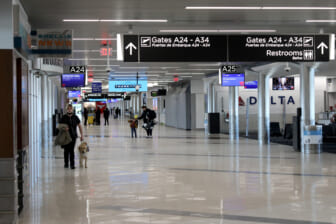 Atlanta Police later identified the suspect as Kenny Wells, 42. Investigators have issued a warrant for Wells’ arrest for carrying a concealed weapon at a commercial airport, possession of a firearm by a convicted felon and discharging a firearm and reckless conduct.

Local and federal law enforcement officials said the suspect fled the scene with his gun shortly after 1:30 p.m. ET on Saturday after Transportation Security Administration (TSA) officials discovered the weapon in his luggage during an x-ray screening at a security checkpoint.

When TSA personnel began a secondary search of the suspect’s belongings, they found the gun, authorities said.

“The passenger lunged into his property, grabbing a firearm that was located inside, which ultimately discharged,” Robert Spinden, TSA federal security director for the state of Georgia, told reporters during a press conference on Saturday. “The passenger then fled the security checkpoint through an adjacent exit lane with his firearm,” Spinden added.

“We’re fortunate that when the firearm went off, nobody was seriously injured,” Spinden said.

TSA officials said later that additional injuries may have occurred elsewhere in the airport.

“There [was] a report of three injuries, but none were associated with the self-evacuation,” Michael Winfrey, deputy chief airport operations for the Atlanta Fire Department, said. “We provided service to those in need and helped to return the airport back to normal business continuity.”

Security personnel gave the all-clear around 3:20 p.m. ET for the airport to resume normal operations. The Federal Aviation Administration (FAA) confirmed on Sunday that it grounded flights from 1:38 p.m. to 2:13 p.m. on Saturday. Officials said the turmoil caused flight delays during the day. 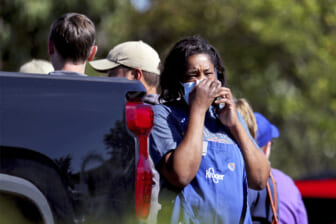 So far this year, the TSA says its officers have found more than 450 guns at Atlanta airport checkpoints. Civil penalties for bringing guns to the airport can vary based on previous offenses and whether or not the gun was loaded, the agency said.

“This incident underscores the importance of checking personal belongings for dangerous items before leaving for the airport,” the TSA said Saturday in a statement about the incident. “Firearms, particularly loaded firearms, introduce an unnecessary risk at checkpoints, have no place in the passenger cabin of an airplane, and represent a very costly mistake for the passengers who attempt to board a flight with them.”