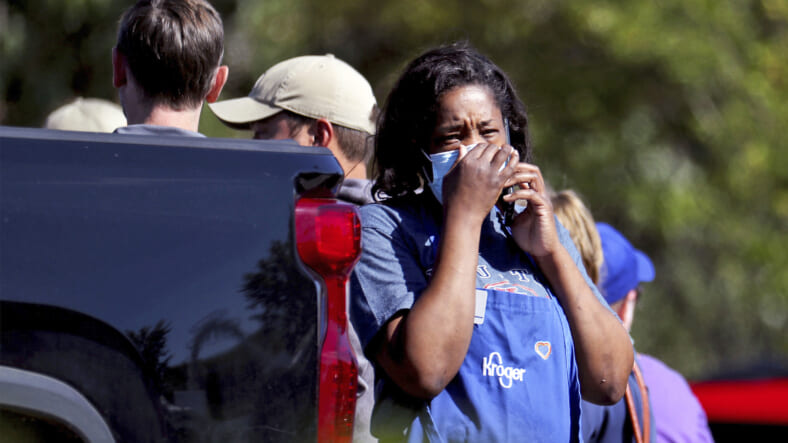 A Kroger employee talks on a cellphone following a shooting at a Kroger's grocery store in Collierville, Tenn., on Thursday, Sept. 23, 2021. (Patrick Lantrip/Daily Memphian via AP)
Loading the player...

A shooter attacked a grocery store in an upscale Tennessee suburb on Thursday afternoon, killing one person and wounding 14 others before the shooter was subsequently found dead of an apparent self-inflicted gunshot wound at the store, authorities said. 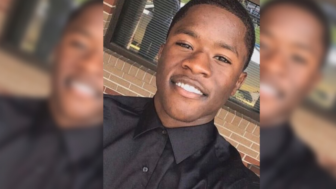 Collierville Police Chief Dale Lane said the shooting broke out at a Kroger store in his suburban community about 30 miles (50 kilometers) east of Memphis. He said 13 people in all were shot and that 12 of them were taken to hospitals, some with very serious injuries.

Lane said police received a call about 1:30 p.m. about the shooting and arrived within minutes, finding multiple people shot when they entered the building.

He said a police SWAT team and other officers went aisle to aisle in the store to find people who sought cover or were in hiding, removing them to safety. He said the shooter, whom he described as male, was found dead of an apparent self-inflicted gunshot wound.

“We found people hiding in freezers, in locked offices. They were doing what they had been trained to do: run, hide, fight,” the chief said without elaborating.

An employee, Glenda McDonald, described the chaotic scene to WHBQ-TV.

“I was walking back towards the floral department and I heard a gunshot,” she said. “It sounded like it was coming from the deli. And I ran out the front door and they had already shot the front door. And I’m in the parking lot now. And several people did get shot, some customers and employees too. I don’t know how many.”

Another Kroger worker, Brignetta Dickerson, told WREG-TV she was working a cash register when she heard what at first she thought was balloons popping.

She said her co-worker, who is in his 20s, was shot in the head and said he wanted his mother.

“I left her a voicemail that he was alert and talking,” Dickerson said, adding that she was still trying to reach her.

She said she hoped and prayed for her coworker’s recovery.

The identities of the shooter and the victims were not immediately released. The suspect’s vehicle was in the store’s parking lot and remained there as part of the investigation, the chief said.

Lane said it was a sad day for his department as he briefed reporters afterward.

“I’ve been involved in this for 34 years and I’ve never seen anything like it,” he told reporters.

He added that investigators are working to sort out how the shooting unfolded and added, “It’s going to take a little bit before we know what happened.”

“Let’s get through the investigation,” Lane said at the news conference later Thursday afternoon. “Remember, we’re two hours away from the most horrific event that’s occurred in Collierville history.”

Collierville is a growing suburb of more than 51,000 people with a median household income of about $114,000, according to U.S. census figures. Nestled in a rural and historic area, the town square has largely become known for its boutiques and bed and breakfasts.

Earlier this year, Tennessee became the latest state to allow most adults 21 and older to carry handguns without first clearing a state-level background check and training. The measure was enacted by Republican Gov. Bill Lee over objections from some law enforcement groups and gun control advocates concerned the measure would possibly lead to more gun violence.

The Kroger Company, based in Cincinnati, Ohio, issued a statement that it was “deeply saddened” by the shooting. 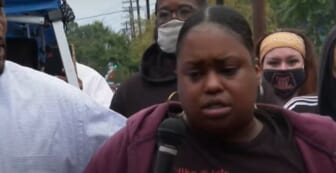 “The entire Kroger family offers our thoughts, prayers and support to the individuals and families of the victims during this difficult time,” the statement said. “We are cooperating with local law enforcement, who have secured the store and parking lot.”

The statement said the store will remain closed while the police investigation continues and add the company has arranged counseling services for its affected workers.