Woods tweeted that he is making progress on Sunday

Tiger Woods was seen back on the golf course recently for the first time since crashing his SUV into a tree earlier this year and severely injuring one of his legs.

The 45-year-old PGA legend tweeted a three-second video of himself hitting a ball on the green Sunday morning. In the video, Woods appeared to be wearing a sleeve or brace on his injured right leg. 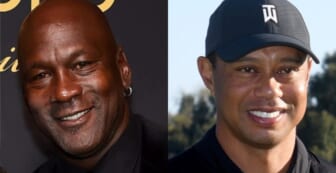 “Making progress,” Woods wrote in the caption of his tweet.

Doctors had to perform several surgeries to repair Woods’ right leg following his Feb. 23 crash in Rolling Hills Estates, California. The incident left Woods’ leg with multiple breaks and “comminuted open fractures,” meaning the bones shattered and broke through his skin, according to USA Today.

A data recorder in Woods’ 2021 Genesis GV80 SUV showed he was driving roughly 75 mph before the vehicle collided with a tree and began rolling over, according to the Los Angeles County Sheriff’s Department.

Earlier this year, the father of two didn’t seem sure if he’d ever play pro golf again.

“This was more painful than anything I have ever experienced,” Woods told Golf Digest of his rehab in May. “I do my routines every day and am focused on my No. 1 goal right now: walking on my own. Taking it one step at a time.” 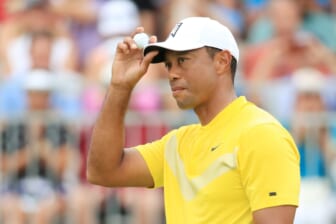 Woods hasn’t been seen much publicly since the accident. Earlier this month, his friend and fellow pro golfer Justin Thomas told the No Laying Up podcast that Woods has been “doing well” recently.

Thomas also said he thinks Woods may be planning a comeback.

“I know that he’s going to try,” Thomas said during the podcast, according to Golf.com. “I know how determined he is and I know he’s going to want to at least try to give something again.”

“I love this,” Thomas said in an earlier tweeted concerning McIlroy Sunday morning. “But I think I love this more,” he added of Woods in a later tweet.

Woods has made post-injury comebacks before. In 2008, he suffered two stress fractures and a torn ACL in his left knee while preparing for the U.S. Open, according to ESPN. He tore his right Achilles tendon the same year.

The 15-time PGA major tournament winner was on an 11-year majors drought before winning his fifth Masters tournament in 2019.