Adele’s school teacher honored at concert: ‘You really did change my life’

An English teacher who Adele told audiences made an impact on her surprised the delighted singer onstage during her ITV concert special, which aired Sunday.

Powerhouse singer Adele got quite the surprise while making the rounds promoting her new album, 30.

ITV recently aired An Audience with Adele, a concert special filmed earlier this month in front of a hometown crowd at the London Palladium that, according to The Newton Citizen, featured superstar Beyonce, actor Samuel L. Jackson and fellow London native Idris Elba.

During the special, which aired Sunday, the 15-time Grammy Award-winner took questions from the audience in a segment shared on the ITV Instagram page, and it included one from Academy Award-winner and fellow Brit Emma Thompson.

Thompson asked the singer if there was anyone in her past who “had supported her, inspired her or protected her from life’s trials and tribulations.” Adele shared that there was indeed a teacher who had made an impact on her life and career.

“I had a teacher at (south London high school) Chestnut Grove, who taught me English. That was Ms. McDonald,” she responded, “She got me really into English literature. Like, I’ve always been obsessed with English, and obviously, now, I write lyrics.”

“She was so bloody cool. So engaging,” Adele added, recalling that McDonald, who was also a dancer during those days, often wore sequins and gold bracelets. “She really made us care, and we knew that she cared about us.”

Thompson then surprised the singer by telling her Ms. McDonald was in the audience. McDonald then joined the happily shocked Adele onstage.

McDonald’s first name remained undisclosed at the time of publication. 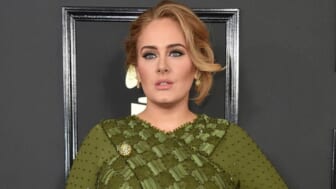 The two exchanged tight hugs and shed warm tears, with Adele asking McDonald for her phone number to keep in touch — and telling her she still has all of her books from when she was her teacher. During the engaging reunion, the singer asked about McDonald’s life and if she has children, two of whom stood up; Adele waved and said hello to them.

McDonald told her former student she was “so proud of her,” and Adele responded, “You really did change my life.”

The watershed moment sparked an impromptu intermission, where host Alan Carr came back to the stage to entertain the visibly touched audience after Adele told McDonald, “Now, I’ve got to get my whole face redone.”

On her own Instagram page, Adele posted a series of pictures and wrote about the show, saying, “Home Sweet Home. I’ve always dreamt of doing An Audience With… There was so much love in the room for each other, it felt like such a gig! Everyone was raucous and bang up for it! And my teacher Ms. McDonald was there, it was just heaven.”