Wanda Cooper-Jones, offended by Laura Hogue's harsh closing arguments, said, “I’ve got to get out of here,” before leaving the courtroom.

As previously reported, Hogue told jurors Monday, “Turning Ahmaud Arbery into a victim after the choices that he made does not reflect the reality of what brought Ahmaud Arbery to Satilla Shores in khaki shorts, with no socks to cover his long dirty toenails.”

“There were two sets of decision makers on Feb. 23,” Hogue continued. “It was not just the McMichaels’ decision that led to this tragedy.”

Arbery’s mother, Wanda Cooper-Jones reacted to Hogue’s presentation, saying, “Wow…I’ve got to get out of here,” leaving the courtroom briefly afterward.

11 Alive, a Georgia station that has been covering the McMichaels-Bryan trial, reported on Cooper’s response at Monday’s press conference, held after the defense’s closing arguments.

“She described Ahmaud as his long legs and his dirty long toenails,” said the still-grieving mother. “That was just beyond rude. Regardless of what kind of toenails he had, what size legs he had, that was still my son. And my son actually was running for his life in that description. I thought that was just, flat-out just rude.”

Marcus Arbery, Ahmaud’s father, said it has been challenging to listen to the characterizations being made about his son.

“It’s really hurtful to his mom and me,” he said as he and Cooper-Jones stood beside family attorney Benjamin Crump.

“After those men in that courtroom assassinated their child, now they are sitting here assassinating his character,” Crump told those assembled. “I mean, if you didn’t know any better, you would think that Ahmaud Arbery was the one being charged. He was the person who was killed, running for his life, and they are saying that he is the person who is on trial here.” 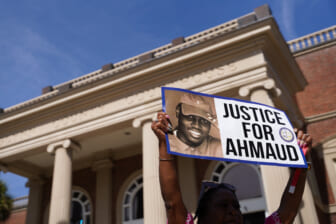 Gregory McMichael, his son, Travis, and their neighbor, William “Roddie” Bryan, are accused of murder and false imprisonment of Arbery, who they shot and killed while he was jogging in their Satilla Shores neighborhood of Brunswick, Georgia, on Feb. 23, 2020.

The McMichaels have claimed there had been past break-ins and trespassing at a house under construction in the area. However, the owner of the house said before the trial that he did not believe anything was missing. The defendants have said they were attempting to execute a citizen’s arrest of Arbery; the law has since been repealed by Georgia Governor Brian Kemp.