Defense claims Ahmaud Arbery partly responsible for his own killing

"Turning Ahmaud Arbery into a victim after the choices that he made does not reflect the reality of what brought [him] to Satilla Shores," said defense attorney Laura Hogue.

The lawyer for one of the defendants in the trial of Ahmaud Arbery‘s alleged killers told jurors during her closing argument on Monday that the late 25-year-old bears some responsibility for his own shooting death. 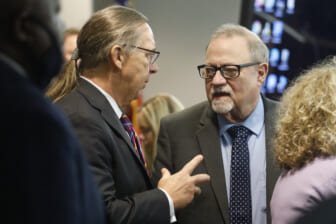 McMichael drove the truck that pursued and boxed in Arbery that day before his son, Travis McMichael, confronted and fatally shot the man after a brief struggle.

The defense team has argued their clients were making a citizen’s arrest of Arbery, whom they suspected of trying to steal property from an unfinished home in their neighborhood. The trial revealed that the McMichaels tried repeatedly to question Arbery as he ignored them and jogged away.

“Turning Ahmaud Arbery into a victim after the choices that he made does not reflect the reality of what brought Ahmaud Arbery to Satilla Shores in khaki shorts, with no socks to cover his long dirty toenails,” Hogue told jurors.

“Wow,” Cooper-Jones responded from her courtroom gallery seat, before leaving the courtroom for a short time.

“There were two sets of decisions makers on Feb. 23,” Hogue continued. “It was not just the McMichael’s decision that led to this tragedy.”

Hogue also told jurors that Arbery made “terrible, unexpected, illogical choices” that day, raising questions about his character and why he was in the McMichaels’ neighborhood. Judge Timothy Walmsley previously ruled that information about Arbery’s criminal history was inadmissible at trial, according to the Atlanta Journal-Constitution.

“A beautiful teenager with a broad smile and a crooked baseball cap can go astray,” Hogue said. “He can deteriorate and lose his way. And years later, he can end up creeping into a home that is not his own and running away instead of facing the consequences.”

Prosecutor Linda Dunikoski told jurors during her own closing argument on Monday that the McMichaels and their neighbor William “Roddie” Bryan racially profiled Arbery.

“All three of these defendants made assumptions about what was going on that day,” she said, according to The New York Times. “And they made their decision to attack Ahmaud Arbery in their driveways, because he was a Black man running down the street.”

Jury deliberations are expected to begin sometime this week.