Shortly after a performance of “Unloyal” with Summer Walker, Lennox tweeted about her arrest at Schiphol Airport.

Fresh off a performance of “Unloyal” with Summer Walker, singer Ari Lennox was arrested Monday morning at Amsterdam Schiphol Airport.

She wrote several times about the incident on Twitter. Her first tweet read, “F**k Amsterdam security. They hate black people.”

Camilla Beckett, a television writer, also shared a negative experience she had in the country, writing, “The last time I was in the Netherlands a man shouted “go back to Africa!” because me and my black companion were in first class and the attendants wouldn’t let him move up, so…”

“Wow,” Lennox tweeted, then “They’re arresting me.” In another tweet, she wrote, “I’m being arrested in Amsterdam for reacting to a woman racially profiling me.”

According to U.S. News and World Report, the Dutch military police who are responsible for security at Schiphol Airport said the singer was detained because of aggressive behavior toward an airline official and for being drunk in public.

“Our unit found a woman full of emotions, that wouldn’t calm down,” spokesman Robert van Kapel said. “That’s why she had to be taken into custody.”

The report notes that the Dutch police are investigating claims of possible threats that Lennox may have made during the incident. 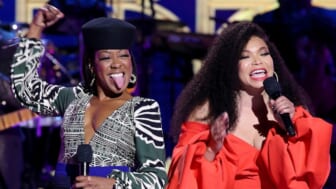 The 30-year-old singer — whose real name is Courtney Shanade Salter — has not posted any further tweets as of press time. It is unclear when she will be released from police custody.

Fans have expressed concern for the singer. One wrote on Twitter, “Ari Lennox just tweeted she is getting arrested at the airport in Amsterdam because she was racially profiled by a woman working there and she responded. She’s famous and she’s still getting arrested. When black ppl say we’re worried about traveling to certain places this is why.”

Another added, “Why is it that every time Blk artist go over seas they wanna arrest them. It’s so tiring.”