Goodwin announced their wedding on Instagram one month after the event, sharing a photo of the couple standing before a floral archway.

Actress Raven Goodwin announced that she and her fiancé, Wiley Battle, were wed on Oct. 29 in Santorini, Greece.

Goodwin announced the marriage on Instagram Monday, one month after the ceremony. She shared a photo of herself and Battle in front of a floral archway with a caption that read: “Peaceful. Simple. It was perfect. Just us and our koúkla. 10*29*2021#thebattlesone2021.”

“Koúkla” in Greek translates to “beautiful doll,” so the 29-year-old actress is likely referring to the couple’s year-old daughter, Riley Rosa Bell Battle, who attended the private ceremony.

Goodwin portrayed Niecy Patterson in the popular series, Being Mary Jane, the title character’s precocious niece, who was always in a jam. The series, which starred Gabrielle Union, debuted in 2014 on BET and concluded in 2019.

Goodwin currently plays Josephine on the Fox drama Our Kind of People.

Goodwin and Battle met in Atlanta in October 2016. In a separate post, in which she shared photos from their wedding, Goodwin reflected on their romance, writing, “We did it, Joe! Thank God for Hbcu’s and @maurachanz —I physically bumped into Wiley at #spelhouse @spelman college @morehouse1867 tailgate on 10-29-2016 and the rest is history. Cheers to the law of attraction!”

According to People, Battle is a Morehouse alumnus and entrepreneur.

The couple announced that they were expecting a daughter in January 2020, and when she was born, Goodwin wrote on Instagram, “I’ve been a mommy for a week. Wow. Her soul is sooo beautiful. She was born on a Wednesday as was I. She has a head full of hair & she is sooooo stunning. She loves music, the sound of her daddy’s voice, and her mamas touch.”

“My daughter you lack nothing, you were born WHOLE, I will make sure you always feel liberated by liberating myself,” she continued. “I’ll always be here.” 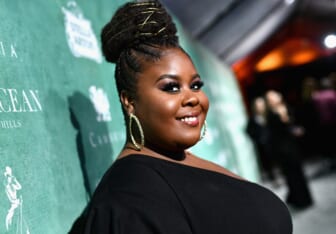 Also Read:
Raven Goodwin to star as Hattie McDaniels in ‘Behind the Smile’

Earlier this year, it was announced that Goodwin will play Hattie McDaniel — the iconic trailblazer who made history as the first African American to win an Academy Award — in an independent biopic titled Behind the Smile. In 1939, McDaniel won the Oscar for Best Supporting Actor for her role as Mammy in Gone With The Wind, and she appeared in over 800 movies in her career.

“Hattie YOU did it. Because of your legacy, we are able to write and portray OURSELVES in whatever light we choose,” Goodwin said in a statement to Deadline. “I am forever honored. I look forward to bringing this important historical and relevant life story to the screen.”