Maralee Nichols gave birth to their son just days after filing a suit against Thompson for child support and pregnancy-related costs.

Sacramento Kings player Tristan Thompson is reportedly a father for the third time as his former personal trainer, Maralee Nichols, gave birth to a son just days after filing a lawsuit against Thompson for child support and pregnancy-related costs.

A representative for Nichols has confirmed to People that the baby was born last week.

As previously reported, British tabloid The Daily Mail broke the story about Nichols — 31, of Houston, Texas — being pregnant with Thompson’s child, featuring exclusive photos of the heavily pregnant woman.

According to the article, Thompson admitted he and Nichols had been intimate more than once after a party.

He said, per The Daily Mail — which published documents from the legal proceedings: “When we got to my hotel room, we immediately had sexual intercourse. Petitioner [Nichols] initiated our sexual contact and never objected to our having sexual intercourse. She was very awake and conscious and did not exhibit any signs that she was other than a willing participant in our sexual activities.” 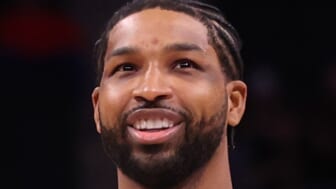 “We did not drink at my hotel room and Petitioner was not drunk,” he continued. “After we had sexual intercourse, Petitioner specifically asked me if she could spend the night because it was my ‘special birthday’ as she called it.”

Sources close to Kardashian told People she “knows about the baby, but hasn’t known for long.” The couple was reportedly still dating at the time that he was intimate with Nichols.

The source said Thompson and Kardashian quarantined together during lockdowns related to the COVID-19 pandemic. She reportedly “knew things would change” when he returned to the NBA, but “she was just hopeful that he would stay faithful and loyal to her.”

The two started dating in 2016, and Thompson was a regular on Keeping Up with the Kardashians in 2017. True was born in April 2018.

In March 2021, Kardashian discussed the possibility of having a second child with Thompson via surrogate on an episode of KUWTK. Her mother, Kris Jenner, told audiences, “I think that if Khloé had her way, she would obviously want to carry her own baby because I think that pregnancy is so amazing, and I know how much she enjoyed it and was obsessed with having True, but I’m just happy that there’s an alternative.”