Of her braids, Kardashian says, "Honestly, a lot of the time, it comes from my daughter asking us to do matching hair."

Keeping Up With the Kardashians star Kim Kardashian addressed past allegations that she has appropriated Black culture by styling her hair in braids on more than one occasion.

The designer-businesswoman spoke with i-D magazine about appropriation, fashion and decisions she makes as a mother of four.

Celebrated Black playwright Jeremy O. Harris, who interviewed Kardashian for the magazine, had dozens of questions about Kardashian’s stint hosting Saturday Night Live this season — a performance praised by fans and critics alike — as well as her passion for Japanese culture and anime.

He then asked: “So I want to ask how you have navigated criticism around things like blackfishing?”

“Obviously, I would never do anything to appropriate any culture. But I have in the past got backlash from putting my hair in braids, and I understand that. Honestly, a lot of the time, it comes from my daughter asking us to do matching hair,” Kardashian replied, referring to North West, her child with her estranged husband, rapper-producer Kanye West. “And I’ve had these conversations with her that are like, ‘Hey, maybe this hairstyle would be better on you and not on me.'” 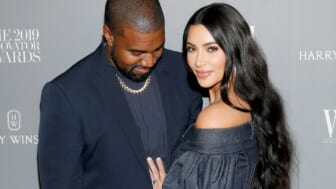 “But I also want her to feel that I can do a hairstyle with her,” noted the 41-year-old, “and not make it that big of a deal either if that’s something that she’s really asking for, and really wants.”

As the mother of four mixed-race children, Kardashian contends, “I’ve learned and grown over the years and figured out good ways to communicate with all my kids about all this. I’ve definitely learned over time, and I’ve tried to pass that culture of learning onto my kids too, but then there’s also a history of braiding hair in Armenia, and people forget that I am Armenian as well.”

Kardashian also addressed her passion for law. The second-oldest daughter of the late renowned attorney Robert Kardashian recently passed an abridged version of the bar exam and wants to help with criminal justice reform. Last year, Oxygen aired the documentary Kim Kardashian: The Justice Project, which detailed her work to free Alice Johnson, a prisoner who been sentenced to life for non-violent drug offenses. Johnson was eventually released after Kardashian successfully petitioned former President Donald Trump for clemency.

“Law school is a long process,” Kardashian told Harris, “and it’s a lot of work, and I’m two years into it and I hope that after school is done, I can just focus on … It’s not really going to change the work that I do, but maybe I’ll have free time to help more people.”

“I really just love that I can use my voice and advocate for people that can’t help themselves and that sometimes don’t know where to turn and are just helpless and hopeless,” she said. “I hope that I can really help where I can and make a difference.”