NBA star Steph Curry became the league’s undisputed 3-point shooting king on Tuesday, strengthening his case as the greatest shooter of all time.

The 33-year-old Golden State Warriors point guard made five of 14 shots from long range Tuesday night, scoring a total of 22 points in New York City in a 105-96 victory over the New York Knicks, according to ESPN. 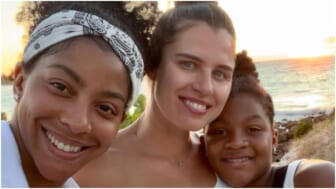 Curry’s golden moment came seven minutes and 33 seconds into the game’s first quarter, ESPN reports, when he caught a pass from teammate Andrew Wiggins and sank a 28-footer from beyond the arc.

That historic shot broke hall-of-famer Ray Allen‘s NBA record for 3-pointers. The Warriors called a timeout moments later to let their star soak it all in after weeks of anticipation.

Teammate Draymond Green hugged Curry, who handed his record-breaking ball to his father, Dell Curry, as the opposing crowd at Madison Square Garden stood and clapped for one of the greatest players of his generation.

Allen, who was in the building, made his way to center court along with fellow 3-point shooting legend Reggie Miller and gave Curry another hug. The new long-ball champion eventually walked over to the Warriors bench before the tears started to flow.

“It was a special moment, for sure, that I appreciate and I’ll remember for the rest of my life, in terms of what it means to me to pass Ray,” Curry told ESPN after the game. “Him and Reggie [Miller], guys I’ve looked up to coming into the game. Definitely special.” 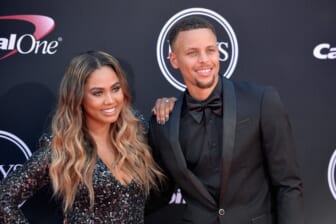 The unselfish professional was seen gifting his teammates with Rolex watches after the game. Curry has become a transformative figure in the NBA since the Warriors drafted him in 2009, doing for 3-point shooting what Julius Irving, Dominique Wilkins and Michael Jordan once did for dunking.

“He’s changed the way the game is played and the way young players think about the game, the way the entire league feels about the shot,” Golden State Warriors Head Coach Steve Kerr told reporters after the game.

“There were 82 threes taken tonight. So, on a night when he broke the record, the sum of both teams’ 3-point attempts was kind of a testament to Steph’s impact on the league too.”