The Grammy-winning 'Afro-Fusion' artist will bring 'Burna Boy Presents One Night in Space,' to MSG on April 28, 2022.

Burna Boy will make music history next spring when he makes a trip to New York City. He is set to become the first Nigerian performer ever to headline a concert at Madison Square Garden, as reported by Billboard.

Billed as “Burna Boy Presents One Night in Space,” the “Like to Party” hitmaker will be giving a one-night-only performance in the World’s Most Famous Arena on April 28. This historic New York concert comes after Burna had landmark 2021 performances at The Hollywood Bowl in Los Angeles, The O2 Arena in London, as well as high profile festival gigs at the Governor’s Ball in New York and Outside Lands in San Francisco. 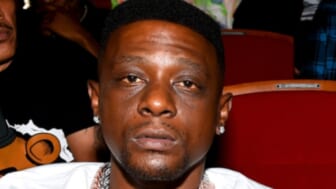 Also Read:
Boosie Badazz being sued for $525K over on-stage brawl in Atlanta

The Grammy-winner promoted his show on his Instagram page earlier this week, writing, “From the Garden city, Port-Harcourt to the “GARDEN” New York! … if you’re crazy enough to think it, you’re crazy enough to do it!” General ticket sales for “Burna Boy Presents One Night in Space” became available on Friday via Ticketmaster.

Burna Boy is one of the most successful stars of the current Afro-beat and, what he’s dubbed the “Afro-Fusion,” craze that’s hit the nation and the world over the past few years. In addition to him spreading his hits all over the globe, other Nigerian artists like WizKid and Davido have been able to achieve international praise. Burna Boy told Billboard that he’s proud to be a leader of this musical movement.

“Same with Fela [Kuti] creating Afro-beat, I created Afro-fusion. It’s my biggest achievement in life,” Burna said. “It’s always a blessing to see [the genre] get to where it’s going right now, especially with the new generation.”

Burna made his breakthrough in the United States in 2020 with his fifth album, Twice as Tall. Featuring production from Timbaland, Andre Harris, Mike Dean, Sean “Diddy” Combs, and Mario Winans, and collaborators like Naughty By Nature, Chris Martin of Coldplay, and Anderson.Paak, Burna was able to take his fusion of pop and hip-hop influences with his Afrobeat foundation to new heights.