Fans of the HBO hit series are still sorting through their feelings after saying farewell to Issa, Molly and the crew.

Insecure fans are still sorting through their feelings after saying farewell to the HBO hit series created by and starring Hollywood darling Issa Rae after five hilarious and memorable seasons.

The Black millennial coming of age comedy and drama, which also starred series regulars Yvonne Orji, Jay Ellis, Natasha Rothwell and Amanda Seales, ended with both surprising and not so surprising outcomes.

One of the biggest and most talked about revelations (spoiler alert!) was the answer to the biggest question of the series: Will Issa and Lawrence get back together or not? The on-again, off-again couple finally decided to live happily ever after (Issa was spotted wearing an engagement ring) in a loving blended family along with Lawrence and Condola’s son Elijah (aka “Jah”).

In other happy news, Molly and Taurean said “I do” in a glamorous wedding fitting for her character; Tiffany and Derek welcomed baby number two after moving to Denver; and in what was probably the most shocking plot twist, Kelly and her partner Desmond announced that they were having a baby. 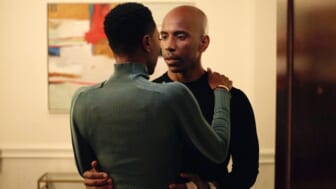 Also Read:
‘Insecure’: Why a lot of us are sleepin’ on the Taureans out here!

In true post-Insecure fashion, Black Twitter had a lot to say about the finale episode — and from the looks of it, Issa Rae and showrunner Prentice Penny left fans satisfied with how everyone’s lives ended up after years of personal and professional ups and downs.

One of the big takeaways was that while romantic love may come and go (Issa and Nathan called it quits), true friendship is a love that endures, evidenced by the show’s female protagonists’ sister circle. Issa and Molly’s friendship, in particular, garnered plenty of reactions from fans who were moved by one touching scene in which the ladies are brought to tears on Molly’s wedding day.

“ISSA AND MOLLY ARE THE REAL LOVE STORY,” tweeted one Twitter user. Entertainment journalist Gia Peppers wrote, “Nah, that was Yvonne and Issa Rae in that scene. No acting at all. Wow.”

Another Twitter user wrote, “Molly and Issa are the loves of each other’s life and I just love how the finale was really in service to that. They were the current and heartbeat.”

After the show’s airing, Yvonne Orji confirmed that the emotional scene that garnered much reactions from fans was indeed real tears as it was Orji’s final scene of the series. “This scene in the bathroom was the final scene I shot as molly. During one of the takes, @The_A_Prentice told me to go off script and thank @IssaRae for how she changed my life. We were crying for real FOR REAL,” revealed Orji.

Penny, who alongside Rae executive produced the series since the first season, took to Twitter to give fans more insight into the creative decisions they landed on for the finale.

“Just so you know. WE AGONIZED on the finale and wrote three versions before we landed on this,” tweeted Penny.

Reacting to all the love the show received from fans on its final Sunday night broadcasting, he added “I’d be lying if I said I wasn’t stressed how the finale was received. I did NOT want to direct it. I was scared of the heat it would get if it didn’t measure up. Which is the exact reason why I know I needed to. So glad y’all received it in the spirit it was made.”

Another scene that was a focus of the finale episode was Issa’s mirror scene in which, for the first time of the series, her reflection does not talk back to her. Penny emphasized, “That was a scene we talked about early on when writing this. Was that the mirror her would no longer be a crutch for her. She would live or die with her decisions.”

Issa Rae for her part kept her public comments on the series short and sweet, tweeting “I love y’all. Thank you for 5 seasons,” along with a photo of her, Orji and Ellis together on the set while filming Molly and Taurean’s wedding.

Reacting to Issa and Lawrence’s return to love, Jay Ellis tweeted, “It was always her … The love story some of y’all loved and some of y’all loved to hate.” In a previous post, Ellis reflected on the past six years filming with his co-stars. Posting another photo of him with Rae and Orji, he captioned, “Costars. Friends. Family… There are really no words to express the last 6 years but hopefully some pics can do it for me.”

In another post Ellis wrote, “It’s rare you get to work with a group of people that you admire, respect, love, root for and consider family. We had a lot against us but we had more working for us and we did it.”

Orji shared her thoughts on the series finale and her character Molly’s happy ending, beautifully capturing the the show’s story arch. She wrote, “For FIVE seasons, @the_a_prentice told me, “when Molly finds happiness, the show is over.” Well, he kept his word. @issarae, Molly might have married Taurean, but you will always be her one true love. 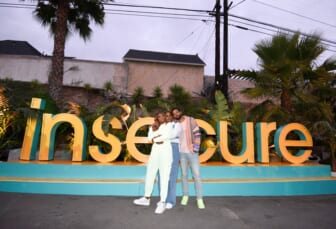 “There’s no saying goodbye to what we’ve shared for the last 6 years. The joy, the love, the support, the camaraderie, the glow-up— it’s all so palpable. What an HONOR it has been to work with every cast member, crew member, writer, producer & @hbo exec that made our show a success.”

Orji added, “Molly Guuurrl. I’m proud of you. To embody your essence has been life-changing and career-defining.”

The actress and comedian also made clear she’s hoping Molly’s good fortune with love rubs off on her in real life. “Lastly… Lord, I seent what you did for our good sis, it’s time for life to imitate art. Amen,” she wrote.