Aaliyah’s uncle confirms posthumous album to be released in January

The handling of the late singer's catalog has been controversial, as her estate spoke out against the release last year

New Aaliyah music is officially on the way. The late singer’s uncle has confirmed a posthumous album is expected to debut this month with some star-studded collaborations on the project.

The past few months have been special for Aaliyah fans as her music catalog finally made it to streaming services after years and years of waiting, theGrio previously reported. The summer and fall of 2021 saw One In A Million, her self-titled album, and more make it to Apple Music and Spotify. The albums also made their way to the Billboard 200 charts due to fans flocking to the projects. 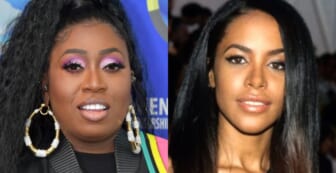 In an interview, Hankerson released major details about the project, including current artists who are being featured and even when fans should expect it. “We’re thinking Ne-Yo, Snoop Dogg, Future and Drake, one of her biggest fans…those are the features that will be on the record, and that will be out in January,” he shared.

The news of a new album comes weeks after the release of a brand new song featuring The Weeknd, “Poison.” In the interview, Hankerson credits the success of the single as the reason why an album is being released so quickly. He explained, “One of the songs that’s out now is doing incredibly well…so because of that success, we’re thinking it will only get better.”

“The body of work is pure hip-hop and R&B,” he explained. “I think it’s going to be big with urban and R&B stations. Some of the people that Aaliyah liked are on the album. She loved Snoop Dogg, who’s done a great record in collaboration with Future. They’re going in now to refreshen their vocals. Ne-Yo gave us an excellent song; also Drake. Timbaland produced the track that Chris Brown did. It’s vintage R&B with strong vocals. I look for that one to also get a very special reaction from listeners. We’ll probably release one more single before the album comes out.”

Hankerson and the label’s handling of Aaliyah’s unreleased catalog, as well as the release of her hit songs, has not gone without controversy.

Last year, her estate released a statement regarding the release and slammed the label: “Protecting Aaliyah’s legacy is, and will always be our focus. For 20 years we have battled behind the scenes, enduring shadowy tactics of deception with unauthorized projects targeted to tarnish. We have always been confused as to why there is such as tenacity in causing more pain alongside what we already have to cope with for the rest of our lives.”