In addition to his daughter with Kardashian and other son, Thompson has a 5-year-child, Prince, with model Jordan Craig.

Sacramento Kings power forward Tristan Thompson has publicly acknowledged that he is the biological father of a son with Maralee Nichols.

In an Instagram Story, Thompson wrote “Today, paternity test results reveal that I fathered a child with Maralee Nichols. I take full responsibility for my actions. Now that paternity has been established I look forward to amicably raising our son.”

He added, “I sincerely apologize to everyone I’ve hurt or disappointed throughout this ordeal both publicly and privately.”

In a second Instagram Story post, Thompson offered an apology to Khloé Kardashian — with whom he has a 3-year-old daughter, True. The couple was still dating when the boy Nichols was conceived.

“You don’t deserve the way I have treated you over the years. My actions certainly have not lined up with the way I view you. I have the utmost respect and love for you. Regardless of what you may think. Again, I am so incredibly sorry.”

Thompson won $50,000 last year in a libel lawsuit against Kimberly Alexander, who claimed he is the father of her 5-year-old son; a DNA test proved that the ball player is not the child’s dad. He sued Alexander for $100,000 after alleging that her paternity accusations were damaging his endorsement opportunities. Prior to the suit, Alexander was sent a cease-and-desist letter from both Thompson and Kardashian, per E! News. 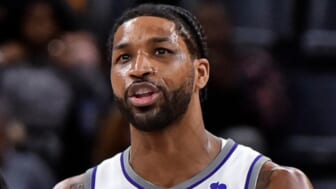 Thompson had previously denied paternity and a relationship with Nichols. However, Nichols recently released a statement to E! News and said she did so “because I feel I must defend my character.”

Nichols stated that despite claims that she and Thompson were not in a relationship, they spent “many nights” together. She noted that she does not “want a romantic relationship with Tristan. My goal is to raise our son in a safe, healthy, loving and private environment.”

In addition to his daughter with Kardashian, Thompson has a 5-year-son, Prince, with model Jordan Craig. She filed a lawsuit against Thompson in 2019, claiming that his relationship with Kardashian — which occurred during her own pregnancy — caused physical and emotional complications.