The cause of the fire has not been determined

A fire ripped through a rowhome in the Fairmount section of Philadelphia and killed eight children and four adults on Wednesday morning in what local reports are calling the deadliest fire in the city in more than a century.

WPVI-TV reports that fire officials say the number of fatalities could increase as they continue recovery efforts.

“Without a doubt one of the most tragic days in our city’s history,” Mayor Jim Kenney said at a news conference near the location of the fire on Wednesday afternoon. “Losing so many kids is just devastating… Keep these babies in your prayers.”

The fire occurred before 6:30 a.m. in a public housing unit where 18 people were reportedly living in the upstairs unit—Unit B. Eight more people lived in the first-floor unit—Unit A.

The Philadelphia Housing Authority reported that as of the most recent occupancy recertification, only 14 people were living in the upper unit—which is where most, if not all, of the fatalities, occurred. The area remained blocked off until late Wednesday evening.

Mayor Kenney said that people should withhold judgment about the living conditions.

“You don’t know the circumstances of each and every family, and maybe there were relatives and family that needed to be sheltered,” Kenney said. “Obviously the tragedy happened, and we all mourn for it. But we can’t make judgment on the number of people living in the house because sometimes people just need to be indoors.” 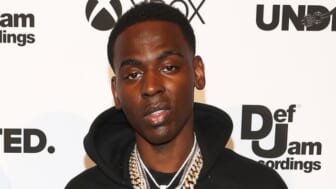 “It was terrible,” Philadelphia Deputy Fire Commissioner Craig Murphy said of the scene, per CNN. “This is probably one of the worst fires I ever been to.”

Rosalee McDonald, 33, and Virginia Thomas, 30, have been identified as two of the victims, according to the Associated Press. The women reportedly have several children between them, but it is unclear if they were all home at the time.

Qaadira Purifoy told CNN affiliate KYW-TV that two of her sisters and four of her nieces and nephews died in the fire. Another woman, Debra Jackson, said her sister was able to escape the home’s first floor with three of her children.

The cause of the fire has not been determined, but investigators are speculating that a child may have sparked a fire to a Christmas tree. There were no working smoke detectors in the home. Smoke detectors had been found working during an inspection last spring, there is no indication why they were no longer functioning.

First Lady Jill Biden, who has ties to the area, tweeted her condolences, writing, “My heart is with the families and loved ones of the victims of the tragic fire in Philadelphia.”

The city’s deadliest fire was in an eight-story building in October 1901, which killed 22 people. A family of nine died in a fire in 1967. The MOVE bombing was the second most deadly fire in the city, with 11 people killed. In May 1985, police dropped explosives on the roof of a row house where members of the civil rights action group lived.

A GoFundMe has been established to raise funds for the final arrangements of the people killed in Wednesday’s fire.