The fire started in a portable electric heater in a bedroom of the Bronx building, the city's fire commissioner said.

A tragic weekend fire in a Bronx apartment building that killed 17 people — including eight children — was caused by a malfunctioning electric space heater.

The heater was reportedly used to supplement the warmth provided in the Bronx building, heat that was functioning at the time. However, the functionality of the building’s fire alarms remains part of the investigation.

“This is going to be one of the worst fires that we have witnessed during modern times,” he said.

As previously reported by the Associated Press, more than five dozen people were injured, and 13 people were still in critical condition in the hospital, according to Stefan Ringel, a senior adviser to Adams. The initial death toll was believed to be 19, however, Mayor Adams on Monday revised that number to 17.

The majority of victims were suffering from severe smoke inhalation, Nigro said at a press conference earlier Sunday afternoon.

Firefighters “found victims on every floor and were taking them out in cardiac and respiratory arrest,” Nigro said at the briefing. “That is unprecedented in our city. We expect there to be numerous fatalities.” 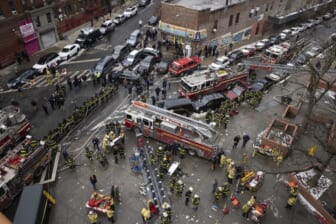 The fire occurred in a 19-story structure with 120 units, and doors that were propped open are being blamed for allowing the smoke to spread to numerous floors. Smoke inhalation is the cause of death for many of the victims. “I think some of them could not escape because of the volume of smoke,” said Nigro.

Many of the building’s residents were immigrants from the Gambia, and a victims’ compensation fund has been established to help survivors find housing and start their recovery. Sunday night, Senate Majority Leader Chuck Schumer described the victims as “immigrants working to drive that ladder up, and their lives snuffed out.”

Hochul said she and Adams are united in their promise to the blaze’s surviving families.

“We will not forget you, we will not abandon you,” the governor vowed at the news conference. “We are here for you. So your elected leaders, from Senator Schumer down to our council members, are here to support this community — to say tonight is a night of tragedy and pain, and tomorrow we begin to rebuild.”

“My heart is with the loved ones of all those we’ve tragically lost, all of those impacted and with our heroic @FDNY firefighters,” she wrote earlier on Twitter. “The entire State of New York stands with New York City.”

The New York City blaze comes just days after a rowhouse fire in Philadelphia killed 12 people, including eight children. That fire was reportedly started by a child playing with a lighter near a Christmas tree.