Voting rights may have failed in the Senate, but our fight is not over

OPINION: Donna Brazile writes, "We cannot turn our backs on the legacy of those who fought hard, or were beaten, lost their jobs or got arrested to have the freedom to vote." 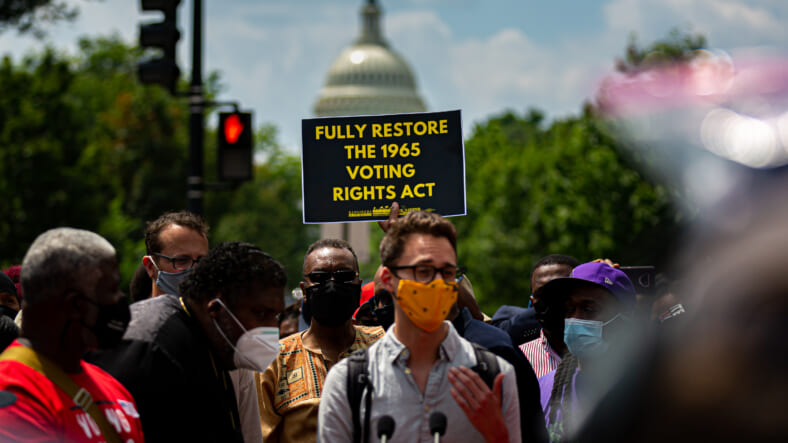 The Poor People’s Campaign rallied and marched in Washington DC, where faith leaders, low-wage workers, and poor people from around the country protested for the US Senate to end the filibuster, protect voting rights, and raise the federal minimum wage to $15 an hour. (Photo by Michael Nigro/Pacific Press/LightRocket via Getty Images)

After honoring Dr. Martin Luther King Jr. on Monday for his courageous fight for freedom and justice for all, we find ourselves continuing his righteous battle. This time the gains he secured under the Voting Rights Act of 1965 are under attack with dangerous ferocity.

Nothing is more essential to the freedom and rights of every American than the right to vote in free and fair elections. When government officials need our votes to hold office they are our public servants. When they don’t need our votes they treat us like we are their servants, as has happened with Black Americans throughout our nation’s history and as occurs today in dictatorships around the world.

Today American democracy is threatened as never before. This threat was intensified Wednesday night when Senate Republicans used the filibuster rule to block a vote on critically important House-passed legislation combining two bills: The Freedom to Vote Act and the John Lewis Voting Rights Advancement Act.

The legislation would establish nationwide standards ensuring the availability of early voting and mail-in voting, make Election Day a federal holiday, and restore federal oversight of elections in states with a history of racial discrimination.

National voting rights legislation is desperately needed to prevent Republicans from enacting modern-day versions of the racist Jim Crow laws that for so long excluded Black Americans from the ballot box, depriving us of equal treatment under the law and our fair share of political power.

Senate Republicans’ unanimous opposition to voting rights is a dramatic contrast from bipartisan support for the 1965 Voting Rights Act, when 30 Republican senators voted for the measure and only two opposed it. Back then, the bill picked up the support of 47 Democrats and was opposed by 17 at a time when many Southern Democrats fought civil rights legislation. 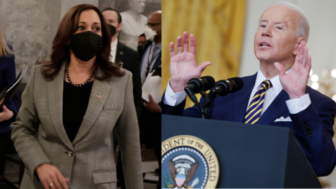 The filibuster rule requires 60 votes for a bill to come up for a vote in the Senate. Even though all 50 Senate Democrats and Vice President Kamala Harris (who can cast tie-breaking votes) support the voting rights bill, it died because no Republicans supported the legislation.

Democratic Sens. Joe Manchin of West Virginia and Kyrsten Sinema of Arizona oppose getting rid of the filibuster or carving out an exception or even a modification for voting rights bills, making it impossible for the legislation to pass. Regrettably, strong and sincere efforts by President Joe Biden and civil rights leaders failed to get Manchin and Sinema to change their minds.

In his news conference on the eve of his first year in office, Biden said: “No matter how hard they make it for minorities to vote, I think you’re going to see them willing to stand in line and defy the attempt to keep them from being able to vote.” Trust me, we cannot turn our backs on the legacy of those who fought hard, or were beaten, lost their jobs or got arrested to have the freedom to vote.

Despite the U.S. Senate blocking voting rights legislation, our fight is not over. We must work at the state level to enact key elements of the Freedom to Vote: John R. Lewis Act, including same-day voter registration, making voting by mail and in drop-boxes over an extended period easy, and in other ways. We should also encourage employers to give their employees paid off to register and vote. And President Biden should issue executive orders where possible to protect our freedom to vote. 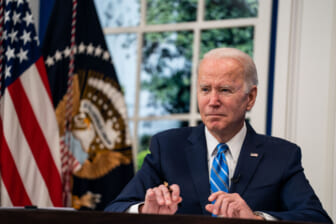 In 1957, Dr. King called on America to “give us the ballot” and stop suppressing the Black vote in words that ring true today. He denounced “all types of conniving methods [that] are still being used to prevent Negroes from becoming registered voters. The denial of this sacred right is a tragic betrayal of the highest mandates of our democratic tradition.” And he wisely added that “each of us must keep faith in the future. Let us not despair.”

Yes, let us not despair. To honor the blessed memory of Dr. King, who worked until his dying day to give us voting rights and the other rights all Americans are entitled to, we must and we shall battle to continue his work and the work of every civil rights leader of his generation. And we shall remind voters before the November elections which members of Congress are working to protect our freedom to vote and which members turned their backs on our long march to freedom.

It’s time to finish the fight for the freedom of all eligible American citizens to vote.