Ari Lennox says she wants to be dropped from labels: ‘You can live without my music’

It has been a rough few months for Lennox. In late November, the singer was arrested at an airport in Amsterdam.

“I want to be dropped from the labels. I’m done and tired,” she wrote in a tweet on which the replies were turned off. Lennox is signed to Interscope Records and Dreamville, the label founded by rapper J. Cole.

In a second tweet, she wrote, “I will continue to sing about d**k when I want! And you misogynistic peasants can continue to jerk off to my music thank you!!!! Good morning.”

In response to one tweet, the singer mentioned a recent interview with a South African podcaster who asked questions she later said she found offensive. While interviewing with MacGyver “MacG” Mukwevho on the Podcast and Chill show, the host asked, “And where are we at right now? Is someone fu**ing you good right now?”

The 30-year-old Lennox visibly recoiled at the line of questioning. “Oh my god,” she said. “That’s a wild question. Why ask it that way? Whoa.”

She later expressed disappointment in her support team and said she was done doing interviews, contending that she was left to feel ambushed and blindsided, per Complex.

“For Christ sakes,” she wrote in response to comments from fans and critics. “I realize I have no hits. I realize you all can live without hearing my music. I realize my complaining is so aggravating to y’all. I don’t ask blogs to post me when I’m at my worst. You judgemental self hating parasites wouldn’t last a day as a signed artist.”

She added: “Complaining that I’m complaining about the shit I’m going through meanwhile in real life you’re just as unhappy just as fucked up. You crying in the car too. Somebody calling you insensitive and dramatic too. You could never be honest about your demons.” 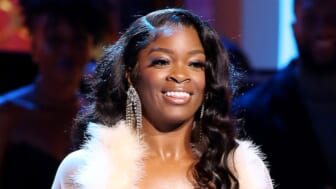 It has been a rough few months for Lennox. In late November, she was arrested at an airport in Amsterdam. According to U.S. News and World Report, the Dutch military police, which is responsible for security at Schiphol Airport, said she was detained because of aggressive behavior toward an airline official and for being drunk in public.

“Our unit found a woman full of emotions that wouldn’t calm down,” spokesman Robert van Kapel said. “That’s why she had to be taken into custody.”

Lennox has reportedly been working on her sophomore album. The first single was “Pressure,” which was released in September of last year.