EXCLUSIVE: "It's about education, not only for customers, about the history, but also for the students," says Getty Images' Cassandra Illidge.

The Historically Black Colleges & Universities Collection will include the digitization of up to 200,000 archival photos that work to preserve the invaluable photographic history of HBCUs. The image gallery is now available on the Getty Images website and is expected to see thousands of pictures added to the series throughout 2022.

“It’s about education, not only for customers, about the history, but also for the students,” Cassandra Illidge, VP of Partnerships at Getty Images, exclusively told theGrio.

Not only will participants at the HBCUs receive funding, but the program will also include an apprenticeship component through a partnership with post-production agency Adnet Global, which specializes in the digitization, restoration and discoverability of visual analog historic libraries.

“Pulling a photo is one thing, but then it’s actually taking that photo, scanning it, cleaning it up and making it commercially viable for licensing,” Illidge explained. “That’s where we work with the schools, but also we apply all that material based on the schools’ recommendations.”

Each HBCU will also retain all copyrights for their photographs. All revenue generated from the images will be directed back into impact programs at the institutions. Grant recipients will receive 50% of the revenue, while 30% will be used as financial donations to scholarship funds at the HBCUs, and the remaining 20% will be reinvested to fund the Getty Images Photo Archive Grants for HBCUs each year that follows.

“The generous investment by Getty Images will offer new, technologically enhanced and advanced ways in which we, as a leading Historically Black University, can further tell our story,” said Johnson O. Akinleye, Ph.D., chancellor of the Durham, North Carolina-based NCCU.

Upwards of 20 Black colleges applied for the inaugural program, and four finalists emerged. Getty plans to allow all of the institutions that tossed their hats into the ring for 2022 to reapply next year. This year’s grant applications were judged by an esteemed panel that included a mix of editorial and historical professionals: 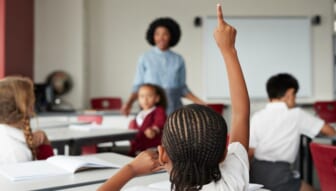 Getty Images describes its HBCUs grant as “part of Getty Images’ commitment to anti-racism, inclusion, and dismantling discrimination including bringing to market unseen historical content and creating revenue streams for organizations working to build a more inclusive society.” The initiative is part of the company’s wider grants program, which has donated over $1.8 million to photographers and videographers around the world for at least 15 years.

“We also understand that it is our duty, as an organization that brings photos to the world, to make sure that we’re bringing more complete photos that show history,” Illidge noted, “and its full completeness.”