The new academy is run by Angela Blocker-Loyd, Candice Tamakloe and Crystal Stewart. In addition to being the first Black-owned female figure skating club in Michigan, it is also Detroit’s first female-owned figure skating academy.

Classes are held at the Adams Butzel Recreation Center-Jack Adams Memorial Ice Arena, and they are reportedly for “skaters with no experience all the way up to advanced skaters.” 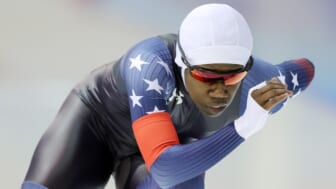 Per the official Dream Detroit Skating Academy website, “DDSA offers a high-quality and rigorous figure skating program for Detroit’s youth that will prepare them for a variety of figure skating disciplines. It is the only Black- and woman-owned figure skating club in the City of Detroit that offers both group and private figure skating lessons to youth ages 4 and up, with skill-building opportunities starting from Learn to Skate classes to competitive and ice show performances.”

Tamakloe shared the academy’s aspirations when opening up to Detroit Free Press, explaining, “There has never been a skater at the national or international level to come out of the city of Detroit. We want to bring that quality back into the city.”

Tamakloe also shared her own past and how it inspired her to open up the academy. She was the only Black figure skater alongside Blocker-Loyd at the Berkley Ice Arena and Recreation Center growing up. She added, “Angie was the little skater and I was the big skater. We were also only two of a few African American skaters at Berkley, and I had been skating there for a few years, so I took her on as a little sister.”

Enrollment into the academy includes group lessons with a trained figure skating professional, a full membership with the U.S. Figure Skating Association  (USFSA), participation in DDSA’s annual Winter Holiday Exhibition and Spring Ice Show, and more, per the Academy site.

Their mission statement also reads that Blocker-Loyd and Tamakloe, “believe that figure skating is not readily available to Detroit’s youth, but there is no reason that the community should not have access to the same opportunities afforded to suburban communities across the globe.”

For more on DDSA, their story and how to enroll, head to the official website, here.