Whoopi Goldberg apologizes after saying Holocaust ‘not about race’

Goldberg took to Twitter with an official apology, before addressing the comments on 'The View' Tuesday morning

After backlash from her controversial comments on Monday’s episode of The View, Whoopi Goldberg has officially apologized.

Earlier in the week, the ladies of the table tackled the topic of recently banned books across the country with To Kill a Mockingbird and Maus, a graphic novel that breaks down the atrocities of the Holocaust.

After a Tennessee school district decided to ban Maus, Goldberg said, “Well, this is white people doing it to white people, so y’all gonna fight amongst yourselves.”

She later said, “If you’re going to do this, then let’s be truthful about it because the Holocaust isn’t about race.” 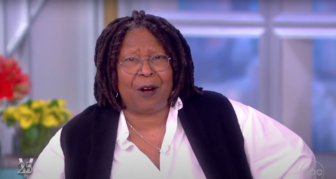 Also Read:
‘How dare you be so flippant!’ Whoopi Goldberg goes off on Bill Maher over COVID-19 jokes

Some of the Goldberg’s co-hosts gently pushed back, including Ana Navarro, who added, “But it’s about white supremacists going after Jews–.”

But Goldberg continued, saying, “But these are two white groups of people! The minute you turn it into race, it goes down this alley. Let’s talk about it for what it is. It’s how people treat each other. It doesn’t matter if you’re Black or white, Jews, it’s each other.”

Her comments received almost immediate backlash online from viewers and even some Jewish leaders. The U.S. Holocaust Museum wrote, “Racism was central to Nazi ideology. Jews were not defined by religion, but by race. Nazi racist beliefs fueled genocide and mass murder. Learn more.”

In a pre-taped interview prior to her releasing an official apology, Goldberg appeared on The Late Show with Stephen Colbert. While addressing how people were hurt by her comments, she did not officially apologize just yet, saying, “It upset a lot of people, which was never ever, ever my intention,” she explained.

“I feel, being Black, when we talk about race, it’s a very different thing to me. So I said I thought the Holocaust wasn’t about race. And people got very angry and still are angry. I’m getting a lot of mail from folks and a lot of real anger. But I thought it was a salient discussion because as a Black person I think of race as being something that I can see. So I see you and know what race you are. I thought it was more about man’s inhumanity to man… people said, ‘No, no, we are a race.’ I felt differently. I respect everything everyone is saying to me.”

On Monday evening, after taping the interview but before it aired, Goldberg posted an official apology to her social media account, writing, “On today’s show, I said the Holocaust ‘is not about race but about man’s inhumanity to man.'”

She continued, “I should have said it is about both. As Jonathan Greenblatt of the Anti-Defamation League shared, ‘The Holocaust was about the Nazi’s systematic annihilation of the Jewish people — who they deemed to be an inferior race.’ I stand corrected.”

She added, “The Jewish people around the world have always had my support and that will never waver. I’m sorry for the hurt I have caused.” 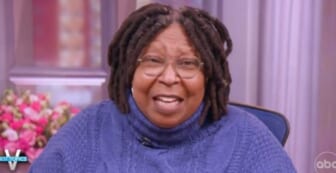 On The View on Tuesday, Goldberg also took time at the top of the show to reiterate her apology.

She shared, “I misspoke, and I tweeted about it last night, but I want you to hear it from me directly. I said something that I feel a responsibility for not leaving unexamined because my words upset so many people which was never my intention. I understand why now, and for that I am deeply, deeply grateful because the information I got was really helpful and helped me understand some different things.”

Goldberg said the Holocaust, “is indeed about race because Hitler and the Nazis considered Jews to be an inferior race. Now, words matter, and mine are no exception. I regret my comments as I said, and I stand corrected.”

She went on to say she stands with the Jewish community as she “always has,” before introducing Greenblatt, CEO of the Anti-Defamation League, to continue the important conversation.